The following delightful letter was written in 1900 by 12 year old Essie for the "Children's Letter to Delphia" competition column in The Queenslander. Essie describes living at their house called "Elimbah" at the mouth of Elimbah Creek at Toorbul with her two older brothers and two older sisters.

Dear Delphia - Seeing in the Queenslander that you have a letter competition, I am going to try and win one of the three prizes. I cannot tell you much about this district, as we only came to live here about two months ago [Lawnton]. But I am going to tell you a little about the district, which I have just left [Toorbul].

It is a very quiet place called Toorbul and is situated on the banks of the Elimbah Creek, and about 12 miles out of Caboolture. What makes Toorbul so quiet, is the people live so far apart from one another, the nearest neighbours being a mile away ; some of them being three and four miles away from each other. I do not know how Elimbah Creek got its name, but I think it was from the black people as I hear that Toorbul and Bribie Island had lots of them some years ago. Our house was called "Elimbah" because it is situated just on the mouth of the Elimbah Creek. Bribie Is. is just opposite our house, so we had a lovely view of it down the passage ; as the creek runs in such a strait sheet across to Bribie. It is called the "Passage."

It was lovely to sit on the verandah and watch the waves rolling over one another. Mr. Bishop used to pass by our house in his cutter twice a week, we used to get frightened to see how his boat would lay over on her side, on a rough day. We were expecting every minute to see the water go over the side. Mr. Bishop brings oysters to Brisbane every week in his cutter from the oysters beds about here. I will tell you where the oyster beds are situated : Donney Brook, Ningi Creek, and Toorbul Point. There is also a Fish Company at Toorbul Point where they tin Schnapper, Bream, Jew Fish and Whiting, some of the latter they catch in the Elimbah Creek. The Sword-fish is very plentiful in the creek, and if you can catch them, and get their Sword, it makes a very pretty ornament. My sister has one a little over a foot long which she thinks a great deal of. On Bribie Island there is a nice lot of pretty shells, my brother went out for a sail and he brought me a few.

I was only once on Bribie Island : but my father and brothers used often to sail over in our boat. I could row it across the creek but my sister wouldn't let me go by myself very often. I have two brothers and two sisters, all older than myself. I am twelve years old and in third class. I go to the North Pine State School now.

At Toorbul there is only a Provisional School and only one teacher. Just a while before we left Toorbul, we got a new teacher our old one "Mr. Ross" went to the war with the Third Contingent. We were all sorry when he left our school. We had about 4 miles to go to school, and we had to cross the creek every morning and night in a boat. Toorbul is a great place for wild flowers, all varieties being numerous. The trees that grew there being :- Gum, Tea Tree, and Cyprus Pine, and Waterfowl of all kinds are also very numerous in Summer, but they nearly all disappear in Winter.

The Magpie and Butcher bird are very common up there. Dear Delphia, I must tell you a little about a butcher bird my brother caught. He got it when it was quite young, and we fed it on bread and worms, and he became quite tame, and learned to talk. He was very fond of milk, and would stretch his neck to look into the cups for some. I had a little wide necked bottle which I used to fill with milk for him, and he used to go to it whenever he wanted a drink. But I am sorry to tell you that one of the horses tramped on him and killed him. He used to get into the horse's box and somehow or other we found him dead, and we think the horse must have killed him.

My father keeps a lot of cows but only a few are milking, my brother and sister milks them. I am learning to milk. I milk one cow. We made butter when we were living at Toorbul, but we sell our milk down here and I can tell you I miss my drink of butter milk.

Dear Delphia, this is the first time I have written to you, next I hope to tell you about this district. I forgot to tell you that we are having a concert and Arbor day Picnic on the 29th of this month. I think I have made my letter long enough so will conclude with love from ESSIE 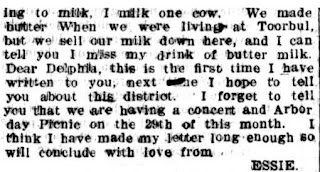