Boyd Blackman, a long serving ranger of the Queensland Parks and Wildlife Service was the March Guest Speaker.  Boyd spoke about his diverse role within the QPWS and how his indigenous background gave him a cultural insight into the historical aspect of the Island.  He has been based on Bribie Island for the past 12 years and previously worked on Fraser Island and in Mt. Isa.

Boyd, a Butchulla man from the Hervey Bay area, spoke about his involvement in the Aboriginal community and his Maryborough grandfather, Jessie Aldridge, who lived to be 100 and taught Boyd about his aboriginal culture.

Boyd’s account of his day to day activities, his amusing anecdotes and stories were not only entertaining but informative. He regaled the meeting with information regarding everything from the introduced pine trees, native timbers, dugong, dolphins, dingoes and emus to keeping tourists under control in the National Park.

Boyd advised of the difficulties in conserving the WW2 relics on the Island and how he has to juggle not only keeping the National and Marine Parks protected but also allowing members of the public to enjoy the beaches and parks through the Recreational Area Management scheme.
Posted by BIHS at 23:38 No comments:

The following information and photos are sourced from Monument Australia 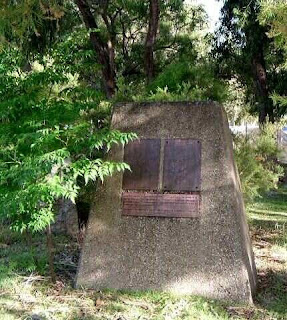 Description:
Monument to explorer Matthew Flinders who landed in the area in 1799.

Front Inscription:
Lt. Matthew Flinders entered Glasshouse Bay (now Moreton Bay) in H.M. Sloop "Norfolk"- and explored the bay and its environs in July, 1799. Pt. Skirmish was the name Flinders gave to a low sandy point on the Eastern side of the inlet to the Pumicestone River (Pumicestone Passage) where Flinders and his crew had a minor skirmish with the local Aboriginals.

The erection of this monument is a result of a generous donation from Mr Douglas Jolly of Brisbane. 4th November, 1979. 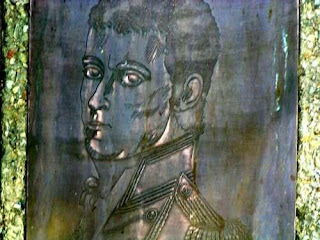 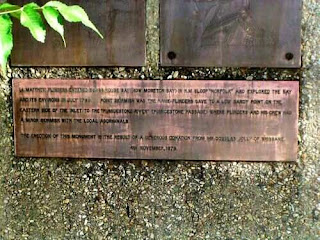 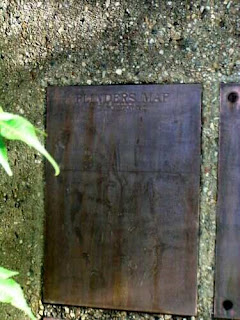 Acknowledgements:
The above photographs by Diane Watson were supplied to Monument Australia.
http://monumentaustralia.org.au/australian_monument/display/90639?image=3
Posted by BIHS at 23:27 No comments:

By the early 20th Century Brisbanites wanted to escape the summer heat and looked to both ships and trains to get them to destinations where they could enjoy clean air, the sun, the bush, and a chance to forget their cares.

Many came to Bribie Island to appreciate the recently discovered joys of the beach.  The beach had come to symbolise the Australian way of life, with its freedom and pleasures of swimming and fishing.

With the purpose-built excursion steamship Koopa arriving in 1912, Bribie Island became a ‘mass experience’ style of holiday destination.  The shores of Pumicestone Passage became a virtual city of white tents as many thousands of campers disembarked for their weekend, Easter or Christmas holidays.

For many, the camping crowd was the attraction with its close quarter socialising but for some having their own private weekender became more than a dream.

While the wealthy always had the means to maintain substantial holiday houses, the middle and working class also saw the benefits of having their own home away from home.   Under many guises, beach shacks, weekenders and holiday cottages began to dot the Australian coast line.  Having your own beach shack gave an independence to the holiday experience.  No longer did you have to put up with intrusive camping neighbours or any larrikins who might upset a peaceful holiday.

A fibro or wooden shack didn’t imply social distinctions, there usually were not many extras, but it was your own place. There were many such shacks built on Bribie Island, though not many are left now, but one little fishing shack in Bongaree has the distinction of still being owned by the same family.

William (Bill) Joseph Robins built his fishing shack on Toorbul Street around 1912. The land was purchased in November 1912 for £6.10s when the land in the Bongaree Township was first offered for sale.

Bill constructed a shack consisting of only one room, with a covered cooking area outside, but over time it became a cottage as it was extended to include two bedrooms and sleepout, a bathroom and a tiny kitchen.


Bill was born in Cleveland in 1867 and he began his association with Bribie Island when he was employed by James Campbell & Sons at their sawmill at Campbellville.   The sawmill was established in 1881 on the banks of Coochin Creek and the milled timber (from the Blackall Ranges) was rafted down the creek to the Bribie Passage then taken firstly by sail-boat and by 1883 by the steam-boat Mavis to Brisbane.

Bill met his future wife Florence Assen at Campbellville.   His future father-in-law Frank also worked at the Mill and had a leasehold property at Coochin Creek.  In 1890 they married at Caboolture and moved to Stoneleigh Street, Albion to be near his employers who had relocated the Campbellville mill, the same year, to Albion.  The ever-expanding railway had changed the way timber was transported and Campbellville was abandoned.

James Campbell & Sons leased 12 acres of land at Bongaree and became co-directors of the Brisbane Tug & Steamship Company who bought the Koopa, built the jetty, and opened Bribie Island to tourism.  Bill, as an employee, obviously took the opportunity to come to Bribie Island with his family on holiday excursions.   Two of his near neighbours on Toorbul Street were from the Campbell family.

Bill was employed by Campbell’s Sawmill for some 50 years and the missing fingers on his left hand was a silent reminder of the hardships of the day working in a sawmill.  His son Charles (Chick) continued the family tradition of working at the Mill and when he retired after 41 years of service it ended almost 100 years of the Robins family’s association with the company -  not counting his maternal grandfather’s (Frank Assen) employment at Campbellville.

The little fishing cottage is still in the Robins’ family having passed to Chick who left it to his two daughters – Rita and Joan.  Joan remembers her mother Sarah producing hot chicken dinners with all the trimmings on the wood stove in the cottage, with a hot plum pudding produced at Christmas.

Joan also recollects her mother Sarah boiling the holiday sheets and towels in the copper and rinsing them in a tin basin as the washing had to be dried before returning home on the Koopa.  "Holidays were never boring on Bribie," said Joan, "we had great fun meeting up with the children from the camp sites and Bongaree was our playground."

Both families love Bribie Island and spend as much time as they can at the family cottage.

Joan and husband Jeff Barber carry on Bill & Chick’s love of fishing bringing home many a catch that leave other fisherman shaking their heads in disbelief.

Acknowledgements:
Thank you to the Robins family for allowing their memories to be shared in this article.
Posted by BIHS at 13:24 No comments: