After more than 20 years living on Bribie Island, prolific and popular historian and writer, Hector Le Gay Holthouse, died on 16th November 1991.  He was 76.

While working as a Sugar Chemist in North Queensland, Hector started contributing stories to magazines, including the Sydney Bulletin, the Queenslander and other Australian journals. After war service he joined the staff of the Brisbane Telegraph, later becoming a lecturer in journalism at the University of Queensland.

In 1967 Hector’s first book was published River of Gold: The Story of the Palmer River Gold Rush. In 1969 he gave up journalism and concentrated on historical writing.

In 1973 Holthouse was awarded a half-fellowship by the literature board of the Australian Council for the Arts.  His most popular book appeared that year: S’pose I Die: The Story of Evelyn Maunsell.

Hector authored more than 30 books focusing on Queensland, many written while living with his wife, Sybil, in the house that he largely built himself in Hill Street, Bongaree.

Hector donated his books to the Bribie Island Library and in the 1990s he was honoured at the Library with the naming of the “Hector Holthouse Room”. 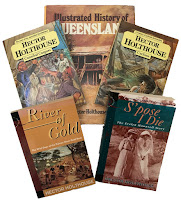 Books by Hector Holthouse
1967 River of Gold: the story of the Palmer River Gold Rush
1969 Cannibal Cargoes
1970 Up Rode the Squatter
1971 Cyclone: a century of Australian cyclonic destruction
1973 Gympie Gold: a dramatic story of Queensland
1973 S’pose I Die: the story of Evelyn Maunsell
1975 Looking Back: the first 150 years of Queensland Schools
1978 Illustrated History of Queensland
1982 Illustrated History of the Sunshine Coast
1988 White Headhunter
1991 Cape York

Many people – particularly the elderly – often recall with great pleasure the early settlement on Bribie Island in about the year 1919 and associated with the island in following years was the steamship “Koopa”. And here I [Doris Stanlake] have endeavoured to recall the atmosphere the Koopa created for the residents of Bribie Island and the day trippers in those days.

The Koopa steamed from the Custom House wharf in Brisbane to the Koopa Company’s jetty on Bribie Island two or three times a week, and these trips were so popular that the vessel was often packed to capacity.

The crowd would gradually gather on the Brisbane wharf around 8 a.m., comprising mainly of happy families bent on enjoying the simple things of life. Mum and kids came armed with picnic baskets, and bathing suits in shopping bags. Dad, anticipating a good catch, would have a sugar bag and fishing tackle. By about 8.40 a.m. the supplies for the island would be loaded on board and the passengers filed up the gangway.

There might be some last-minute arrivals – a few businessmen, with expensive fishing gear, getting away from it all by spending a couple of weeks without the telephone and other worries. (Once on Bribie they would lunch at the little boarding house and later emerge as unrecognisable “tramps” to do battle with the fish.  All business aplomb would be thrown to the winds and they would be known to the Bribie-ites as “Old Bill”, “John”, “Claude”, etc.)

On the Koopa morning tea was served below decks and a call was made at Redcliffe where goods could be off or on-loaded, more passengers could join the happy trippers.

After leaving Redcliffe jetty, the trip was felt to be really under way. Small children scrambled everywhere with ice cream and sticky sweets . . . the vessel would rock gently, and the sea breeze would blow; and long before the island was sighted the breeze would waft to the Koopa the smell of burnt pine and seaweed.

Skirmish Point, the most southernly point of Bribie Island, would come into sight and the boat would spring to life. Mum would get busy gathering her brood, putting them into their bathers and collecting the picnic baskets, ready for disembarkation. The men were engrossed in serious discussion about the wind and the tide while they assembled their fishing gear.

As the steamship glided up Pumicestone Passage, the smell of fish being cooked on wood stoves on the island would mingle with the fragrance of the pines. Everyone made ready to leap onto the jetty immediately the vessel was secured.

Open-decked motor boats moored to the side of the jetty were a picturesque sight laden with produce from the local dairy, fruit and oyster farms. One boat would have a pyramid of huge, yellow pineapples and bunches of bananas, another pile of shiny, pink-shelled, cooked sand crabs glistening in the sunlight in contrast to the lush green vegetables and water melons on display in the next boat. Then there were the fishing boats with their overnight catch of large mullet and reef fish, and cooked prawns.

People holidaying on the island were dependent, to a great extent, on these farmers for fresh supplies and would rally forth armed with bags and billy-cans to shop from the boats . . . great fun!

Then Ned Bishop’s boat would chug its way across the passage and take its place alongside the ramp, loaded to the waterline with anything his farm would produce. There were neatly sewn up bags of oysters, bright red mud crabs and a pile of “lean mutton” (which we all knew was goat flesh) as a welcome change from a steady fish diet. There were baskets of mulberries, mangoes, chokoes and Queensland nuts, while in the middle of the boat there would be two large cans of fresh milk. Accompanying the cans was a tin mug which was used to fill our billy-cans. Unhygienic? But we suffered no ill effects.

And so the day passed with the day trippers having fun and frolic in the sand and sea and the fishing lines reeling until half an hour before the Koopa’s scheduled departure time when her foghorn would give out a resounding blast to be heard all over the island. Then began the hasty packing up and trek back to the steamship. There would be bush walkers with bunches of boronia and wild flowers, groups of picnickers and mothers shepherding their suntanned families along the ramp and up the gang-plank. There they would await the men folk who would scurry along when the second foghorn blast sounded at a quarter of an hour before leaving time. On board the fish the men had caught were hung in the breeze on the captain’s bridge and duly admired by all.

Then came the third blast at departure time and the Koopa was released from her mooring and slid gently away from the jetty with always a group of local residents to watch her go.

And we – the locals – watched, perhaps a little regretfully, until the Koopa vanished from sight.