A walk along the Bongaree Jetty and Esplanade precinct is very pleasant and allows an opportunity to read the information contained on several Heritage site signs.

In this picturesque area there are three Heritage site signs which were unveiled in 2004.

For those folk who are not able to walk through this lovely area, below is a copy of the signs and information about their unveiling.


Program for the Official opening of the newly refurbished Bongaree Jetty and Bongaree Esplanade Improvement Project.

The Heritage Site signs give a brief history of:

1911 The Birth of Modern Tourism in Queensland

Caption: The Brisbane Tug and Steamship Company established the first Island tourist resort in Queensland on the 153 sq km Bribie Island. Prior to this, the Tug "Greyhound" and then "Beaver" had opened up a service to Bribie in 1901.
SS Koopa photo by permission of the Hall Family.

1912 The First Jetty at Bongaree

Caption: The Brisbane Tug and Steamship Company built the first jetty at Bongaree and commissioned the SS Koopa to transport tourists from Brisbane and Redcliffe. Since then the jetty has been expanded, reduced and rebuilt many times.
Photo by permission of the Campbell Family. 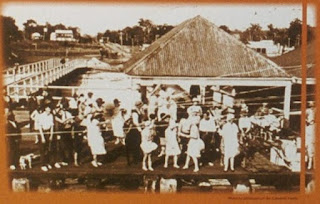 Caption: Prior to the great depression, up to seven ships were tied up at the jetty. Thousands of tourists disembarked on first one walkway then two and then three, with an extended head connecting the multiple walkways. It is interesting to note that in 1917 a competitive destination "Umbigumbi" opened, this is now known as Surfers Paradise.
Photo by permission of the Campbell Family.


1911-1961 ss Koopa Luxury Steamship
Caption: This 62-metre vessel could carry up to 1200 passengers and at one time even had an orchestra for entertainment. The travel time from Brisbane to Bribie was a leisurely three hours. To cope with shallow waters in Pumicestone Passage it had a flat bottom hull to achieve a draft of two metres. As per the 'Packet License' regulations at the time, at three nautical miles from the home berth, the stewards opened the lavish bar on the lower forward deck. On the intermediate deck, patrons could enter the casino, where they mostly played poker. Excellent food was also served. For example: Oysters with buttered bread were 1/- (one Shilling) per plate. At night the ss Koopa was an impressive sight as she was well lit with a total of 159 lamps. During WWII the Royal Australian Navy commissioned the ss Koopa in 1942. After her war service she was returned to public service. The locally formed Moreton Bay Development Company bought the Koopa and began operation in early 1952. Their objective was to keep the Koopa operating until the bridge was built bu ceased operating in 1953. The Koopa continued on various runs until finally scrapped around 1961. The bridge opened in 1963 ending this era of steamship transport.
Photo by permission of John Oxley Library.

Caption: This 70-metre vessel could carry up to 1524 passengers. Formerly H.M.S. Wexford, the vessel was built in 1919 and arrived in Brisbane in November 1923. She was refitted as a passenger ship with a promenade deck added to seat up to 280 passengers. The Wexford was then renamed the ss Doomba. Her fastest run to Bribie was two hours (excluding berthing in Redcliffe) and she touched a top speed of 19 knots. The Royal Australian navy re-commissioned the H.M.A.S. Doomba in 1939 and she served once again as a minesweeper, mainly in Bass Strait. After the war she was sold and used as a bulk carrier and finally as a barge. She was eventually scuttled in 1976.  Photo by permission of the Hall Family. 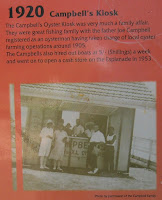 Caption:
The Campbell's Oyster Kiosk was very much a family affair. They were a great fishing family with the father Joe Campbell registered as an oysterman having taken charge of local oyster farming operations around 1905.  The Campbell's also hired out boats at 5/- (Shillings) a week and went on to open a cash store on the Esplanade in 1953.
Photo by permission of the Hall Family.


1921 Camping Grounds on the Foreshore at Bongaree 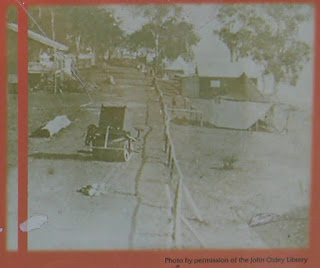 Caption: Looking towards what is now Brennans Park the scene would have looked very different in the 1920s. In the top left hand corner of the photograph is the Brisbane Tug and Steamship caretaker's residence. Underneath this building was the location of the first post office on Bribie Island.
Photo by permission of the John Oxley Library. 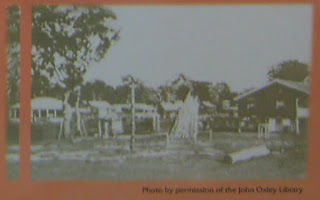 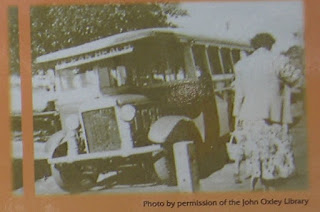 Caption: The photo shows a more modern Bribie Island bus meeting the passengers from steamships. The buses operated between the Jetty and Ocean Beach Woorim.
Photo by permission of the John Oxley Library.


1963 The Bribie Island Bridge
The 831 metre Bribie Island bridge officially opens at a cost of £358,156 and the era of water transport is effectively over. To recover construction costs a 5/- Shilling toll was placed on the bridge until 1973.

Special Thanks to local historians Warwick Outram and Ron Powell for their invaluable assistance with historical research. 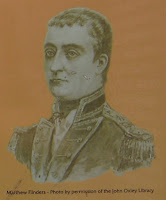 Acknowledgement: This plaque also acknowledges a commemorative ceremony held on 16 July 1999 to celebrate the Bicentenary of Matthew Flinders' Landing on Bribie Island 16 July 1799.


Caption: Around 1918 just after the war the Brisbane Tug and Steamship Company constructed twelve huts on their foreshore leasehold just behind the Bribie Jetty.

In the foreground of the photograph is a temporary jetty for unloading road metal (gravel) during construction of the first road to Woorim. 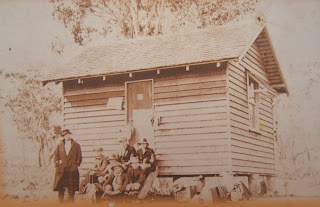 The aim was to provide cheap holiday accommodation for visitors who did not wish to camp.

In later years these twelve apostles, as they became popularly known, were to provide more permanent accommodation to the Island's pensioners.
Photo by permission of the Hall Family.

1901-1912 Tugs on the Leaning Fig
Caption:
From 1901-1912 the tugs 'Beaver' and 'Greyhound', which had been refitted to carry passengers, transported early visitors to the Island.

Prior to the Jetty (shown in the photo just completed in 1912) passengers were transferred to the shore in a square end Punt with seats all around. The Punt was hauled ashore and secured to a tree. That tree is believed to be the leaning Fig adjacent to this site.

Welcome to the Jetty Precinct [Heritage Site sign]
1932 Hall and Bestmann General Store
Caption: In 1913 Alfred Hall and Artie Bestmann started what was to become the first general store at Bongaree. Alfred Hall owned a grocery store in Brisbane and started by bringing up some groceries and selling them through the kitchen window. In 1921 they built the purpose built store shown in the photograph next door to their residence.
Photo by permission of the Hall Family.

1924/25 Toll Road and Early Transport
Caption: To recover the construction costs, the road from Bongaree to Woorim had a Toll of 1/- (One Shilling). During its construction road material was brought from Brisbane and crushed at Bongaree. A horse attached to a skip by rope pulled it up a ramp. A truck drove under a level section of the elevated ramp and workers tipped the skips to drop the road base into the truck. The 1925 photo here shows a self-made roundabout for tour buses.
Model T Ford passenger buses take holidaymakers to the Brisbane Tug and Steamship Company Hotel at Ocean Beach Woorim. Bus fares ranged from 9d (nine pennies) for children to 1/6 (One Shilling and sixpence) for adults.
1920 Holiday Time at Bribie in the Early Days 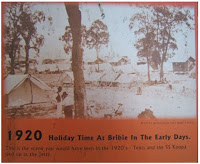 Caption: This is the scene you would have seen in the 1920s. Tents and the ss Koopa tied up at the Jetty.

1920s Shops and Guest House - Northern Side of the Jetty


Caption: The facilities available in the 1920s included a Cafe, Museum and Boarding House. The Cafe's veranda reached out onto the water's edge.
Photo by permission of Mr. Sam Hawkins.


Caption:
This photograph shows a view of the Jetty, Camping Area and First Avenue going straight ahead to Woorim. To the left of the Jetty is the temporary gantry for unloading the road metal.
Photo by permission of the Campbell Family.


Acknowledgements:
The above photos have been collected by the Bribie Island Historical Society for the BIHS Historical Database, particularly from the collections of Peta Newcomb, Robert Price and Donna Holmes.
Posted by BIHS at 21:26 No comments: