Caravanner makes a trip by motor boat along a picturesque waterway.

1932 article by The Queenslander Journalist-Photographer

1932 was at the height of the Great Depression, with 32% unemployment in Australia. The following article describes a trip through the Bribie Passage (now called Pumicestone Passage) and the author seems to have captured the spirit of "sometimes the best things in life are free". 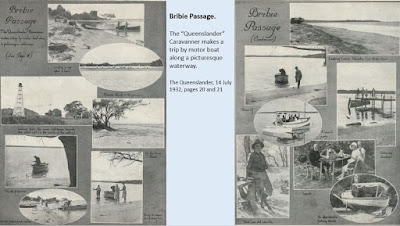 I THINK one of the things that impresses me most as we continue on our journey is the fact that money, as an actual substance, save for what is required in order to keep our wheels oiled, counts much less in the scheme of things than we are led to believe. No one wishes to be short of it, of course, but I fancy that to have more than is required (as many have) is to be loaded with a burden the weight of which (especially when so many have insufficient) must always be felt. It has been said by one writer that the best things in life cannot be bought. That is true. They may be earned, won, but not bribed to come to us. I would never expect that many would believe this, nor even attempt to bring themselves to think it, because almost all our idols (earthly ones) must have money — the present-day standard of greatness — yet it would not be bad, I think, if those who are doing quite well (and there are still many) were to cease prattling of the depression which they have never felt. Such talk is so futile, and we have lately so much of it that I would now welcome the business man who limited his conversation to, say, the weather — that being a subject about which most of us know just as much, and that much being very little!

Lately I have met one or two men who carried their depression tactics to the seaside, endeavouring apparently to turn the thoughts of contented fishermen like myself into financial channels. That is not kind, nor thoughtful, nor indicative of singular mental balance. The amateur fisherman wants, fish, not imaginative theories of finance. Fish will not bite at them, nor will the tide be deviated by them from its inward and outward flow.

Just before going on a launching jaunt up Bribie Passage I happened (like an accident) across a genuine depressionist who, after flattering me by expressing the opinion that after all my travels I must know everything (or something to that effect), started on a financial caper. He knew the solution to everything — except how to rid himself of depression. I suggested that he should take up fishing, and he replied that the times were too serious. It was a world-wide matter and he felt it incumbent upon him to show an example to others by refraining from sport of any kind — and so forth.

And down Bribie Passage the sun sparkled on sparkling water; fish leapt from the briny, and here and there small boats with parties of enthusiasts (not depressionists) chugged away to some sublime spot where Nature would recompense them with something more solid than all the Yellow God promises them. Though myself keenly interested in the problems of today I find myself just as much interested in life and the enjoyment of happy moments as ever I was, with perhaps a keener realisation of the necessity for mental rest (only obtained when we enjoy ourselves) than ever. So, removing my depressing friend's metaphorical finger from my metaphorical buttonhole, I joined our small party and, like those who went before, was soon chugging away up the passage.

I suppose there are many who know Bribie Passage well and who have spent many holidays in the vicinity, but to me it is something entirely new, a place with a strong lure. Of course it is more or less a freak of Nature, and therefore appeals to those inclined to things curious. They tell me the passage is slowly but surely silting up, suggesting the possibility of Bribie Island becoming common or garden coastline in a century or so. And, after all, what do a few hundred years or so matter? One can easily imagine men of a few centuries hence referring to the fact that their city was built upon a place where Bribie Island once was, just as the residents of Chillagoe say: "This was once the bed of the ocean, you know," which makes a visitor go to bed and dream of being clutched by an octopus or being devoured by a shark.

MEANWHILE the aforesaid passage is a reality, and as the Marine Department has recently revised the channel markings navigation there is not difficult. The journey provides many features of interest, including almost unlimited numbers of pelicans, black swans, and other species of bird life. One can see black swans in parks, of course, but they do not ap pear to be quite the same. They get a tame look and the watchfulness of the hunter disappears from their eyes. I know there are many persons who think only the human face has any marked expression on it, but that is a mistake. It's just another case of the two-legged animal thinking he is all that counts, and assuming the right to a monopoly of intelligence. When I meet persons of this type — and they certainly are not uncommon — I think of a writer who said: "The dullest men are those who think they are clever." As I am married it would be unwise of me to suggest that this remark evidently was intended also to refer to women. How easy it is to "tread upon delicate ground." Some miles up the passage we sighted one particularly fine swan sunning his wings, and immediately one lady in our party said: "Isn't she a fine bird?" I said: "Yes, he is," and was told that men always imagine they are the superior sex. Still, I am sure, by the poise of that bird's head and by the light of ultra-intelligence shining in its eyes, that it was a male. There are things one has to keep to oneself.

Nearly one hundred years before I was born (that is a good way to remember dates) Bribie Passage was discovered by Matthew Flinders — a fact of which I was quite ignorant until I read the story of it in "The Queenslander" some weeks back. We all speak, of course, from present-day standards, having little else to go upon, hence it may even be possible that Bribie Passage, in keeping with the rest at Australia, may have been discovered many millions of years ago. All save geologists appear to me to work out all their theories as to the origin of places, &c., on a sort of X basis — X equals so-and-so, but goodness only knows what so-and-so equals, unless it be the unknown quantity. When I was quite young, even the most clever people seldom dared to trace things back more than some 2000 years, and any one who suggested the bare possibility of anything at all having existed, say, a million years ago was supposed to be decidedly abnormal. But times change, and the searcher for ancient relics who can give us news of bygone civilisations is welcomed as a provider of thrills. He is pardoned nowadays for trespassing even on traditions, though he may possibly dispel some of them — which on the part of any other man is an unpardonable thing to do. Writing of traditions makes me wonder what really constitutes them. What is tradition? Of late I have purposely asked several persons what tradition was, and not one of them could put the answer into words. One man, whom I met while on this launching jaunt, said he considered tradition was something based upon the glorious deeds of the past, but he subsequently qualified that statement by saying that, as all the alleged glorious deeds referred to had not been tried by a high court and proved to be absolutely worthy of worship, it might be necessary to add other elements to the make-up of tradition. Personally I think the best tradition is concocted from the doings of such men as Captain Cook, Matthew Flinders, Amundsen, and the like, because we know pretty well what they did.

So, while we spent this day in the passage I was pleased that I had read so much of the life of Matthew Flinders (even though the Bribie Passage incident had receded from my memory), and I found myself wishing that I, too, had been on voyages with the discoverers of places and the makers of real history. I wonder what it is that makes us long to be the first to see new things — even if it be only a new type of valve for wireless that is not yet on the market, anything however small. I suppose it is some of the old spirit that directed the actions of explorers, a spirit that is still trying to eke out an existence beneath the ever-thickening coat of insulation and veneer that advancing civilisation is compelling us to adopt. In all our modest travels I have never experienced a greater thrill than when on the north-western line we followed for a day in the footsteps of Sir Hubert Wilkins — photographed the same carvings in the rocks, passed along the same track guided by the same guide. It is better, perhaps, to walk in the shadow of a great man (if we cannot be the man himself) than it is to have no objective other than passing along through life in the ruts of the multitude. Some would say: "Oh, but we cannot all do that." Why not? Is it absolutely essential that every young man should go to the same seaside resort each year instead of hiking away in search of the uncommon? How we love comfort these days. Truly we are wrapping the present generation up in cotton wool.

Just a few hours ago we had five lines out from our boat, and the fish were generous. To our lines came big bream and flathead and crabs galore. We tarried over-long until the shadows fell and the waters of the passage grew glassy, as such waters do on the fall of the wind and the coming of evening. On the homeward run a long line of churned water spread away to our stern, phosphorescent. Hills and the outline of the land melted into apparent nothingness. We all became silent, as people are wont to do after a good day, just as if this falling of night were the spreading of a pall over something we particularly loved and to which we were saying a last farewell.

The engine chugged on. The night grew cooler. Nature was asleep at last — and we were yearning for it, too. Such moments appear to me to be exceptionally transitory. I was wondering how long this could last when the voice of our skipper, a man-aged by many years, brought me back to life. "Here we are," he said, and the keel of our boat grated on the beach. Such is life.

We have just left Caloundra. As we passed the State school the children, lined up by the kindly school master, gave us a final cheers. (The journey to be continued.)