Over the century from 1865 to 1965 many different people have written fascinating first-hand accounts recording their personal experience of visiting Bribie Island. Each story provides a special insight into both the writer and the events they experienced during their time here and this insight reveals many different aspects of life and times on Bribie over those 100 years.


Following extensive research and document selection the Bribie Island Historical Society has published a book containing a number of these unique first-hand accounts.

Over the last ten years Donna Holmes, Coordinator of the BIHS Historical Database Project has recorded over 10,000 references to photos, documents and articles mentioning Bribie Island. Donna selected 27 historical accounts in various formats including articles, letters and poems containing descriptive details of what Bribie Island was like when their writer visited.

The earliest stories are two letters written in 1865 on an Easter trip to Bribie by four men in a row boat. What an adventure they had rowing up the Pumicestone Passage! One man was the first premier of Queensland, another was manager of the Bank of NSW in Brisbane. The second letter was originally sent to a niece on the other side of the world and is illustrated with a series of delightful sketches and a wonderful map of Moreton Bay showing the journey stops.

Another narrative tells of an old man and a boy on a week-long trip from Beaudesert to Bribie Island in a horse and cart in 1909.  There are accounts of journeys on excursion steamships from Brisbane while other stories are written by early settlers, soldiers who were posted here and pioneers of families who descendants still live on Bribie today.

The authors include famous people like Thomas Welsby though mainly they are ordinary people who came to Bribie Island to do a job, make a new life or escape from an old one. Many of the documents have been sourced from newspapers of the time, through the John Oxley Library or from items donated to the Historical Society by descendants of the writer.

The selected accounts are all so different and provide insightful understanding of the various eras of Bribie's history. What it was like in the 1890s, during the First World War, the Depression years, the Second World War, the struggles of the 1950s and the boom years after the Bridge. The most recent account is a poem written in 1965 by the Island's Librarian.

This is the first published book by the Bribie Island Historical Society, which will celebrate its tenth anniversary in 2018. The book has over 80 pages of well-referenced material with numerous footnotes and several illustrations from the original stories. Copies are available to members of the public for $20 plus postage. For further information please contact BIHS on bribiehistoricalsociety@gmail.com

In the 2018 edition (#44) of Bribie magazine Holiday Guide & Business Directory (page 21) is an interesting article Chasing the Tourism Dollar about two past attractions on Bribie - the seawater Aquarium at Red Beach (1960s) and the Funland waterslide (1980s).

Bribie Island has always been chasing the tourism dollar from before the bridge was built. When the area of Bongaree was settled and the jetty was built, regular trips by the Koopa from Brisbane and Redcliffe brought the first tourists here.

Weekend and holiday time were the busiest with people coming for the fishing and beaches. Most would be camping as there weren't many houses or permanent residents at that time.

In the 1920s the road from the Bongaree area to Ocean Beach was built but it was still a long trip to get across to that side of the island. This didn't deter the many holiday makers from making the trip and Bribie has continued to attract tourists from then until now.

In the 1950s the common way to reach Bribie Island was by the barge that ran from Toorbul Point. This was convenient as people could bring their cars over to the island.

In 1963 the biggest boom to Bribie's tourist marked came when the Bribie Island bridge was built. It was at this time that incentives were offered for new tourist attractions so in 1962, before the bridge was completed, a seawater aquarium was developed in the bush area adjacent to Red Beach.

The aquarium had large glass fronted concrete tanks which were screened by shade huts and linked by pipes. Specimens for the aquarium were collected from the surrounding region. Unfortunately the aquarium failed to attract enough tourists and closed within a year of opening.

The remains of the aquarium tanks can be seen if you travel to the carpark at Red Beach. Follow the carpark all the way to the right and you will see a track entrance which leads to the spot where the aquarium was situated.


In June 1986 a Water Park for Bribie was publicised with the following article:

"A major water theme park and waterslide is to be built on Bribie. To be centrally located on Goodwin Drive the development will consist of a waterslide, swimming pools, trampolines, mini-car track and will be set in landscaped gardens with BBQ facilities, tables chairs and other picnic facilities.
The waterslide will dominate the west Bribie skyline and should prove a major attraction, not only to residents, but to our tourists as well. At long last, Bribie will be able to offer its first major tourist attractions."

This heralded another tourism opportunity for Bribie.  The waterslide arrived and was open to the public on 1 November 1986.  Unfortunately the interest in the venture died off and they weren't attracting the numbers necessary to keep it open. The waterslide was dismantled and sold off.

The building was placed in the centre of the dividing strip in Benabrow Avenue which placed it in highly visible position for the public. A new building has since replaced the first one situated there and it still receives a large number of visitors all through the year.

So Bribie has always been chasing the tourism dollar, at times it has been difficult to promote due its location, not being part of Brisbane or the Sunshine Coast, but when you look at it people have, and always will, visit Bribie Island to enjoy a holiday at the beach were you can fish, swim, camp or just relax.

A small collection of historical photos appears in the 2018 edition (#44) of Bribie magazine Holiday Guide & Business Directory (page 31-32) entitled "A Snapshot of Life on Bribie Island in the 1900s".


A SNAPSHOT OF LIFE ON BRIBIE ISLAND IN THE 1900s
Photos courtesy of the Barraud and McMackin families of Bribie Island.

1. Barge arriving at South Bribie Marine, current spot of the VMR in Bellara. 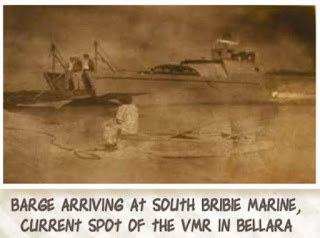 2. Boat Shed in 1928 - these people are standing were the boat ramp is at Bongaree today. 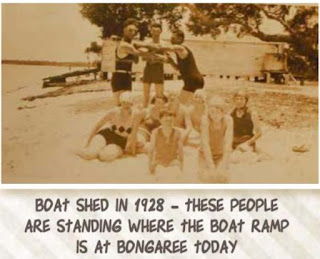 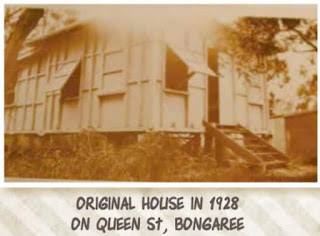 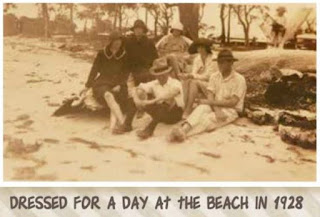 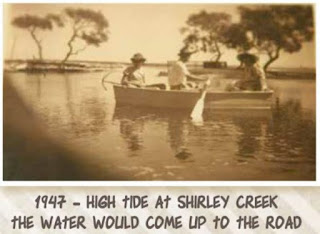 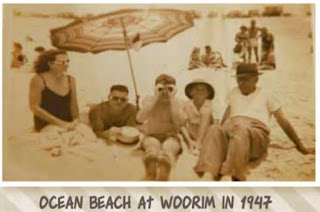