The following articles and photos provide a glimpse of life on Bribie in 1960.

Shore is a mystery!

NEARLY HALF a mile from the nearest water, lined up on stumps in a street of conventional houses on Bribie Island in Queensland's Moreton Bay, is an old boat converted into a comfortable dwelling with electricity laid on and a rainwater tank at the back door.

There is some mystery about the boat. Neither its present occupier nor anyone else appears to know how it got there, or when, or why. 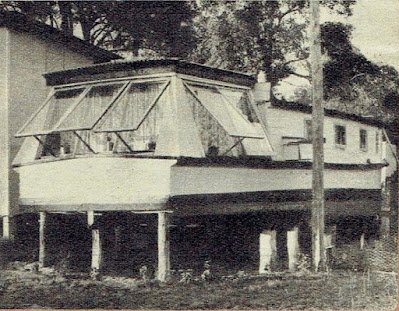 Time has defeated those curious people who have tried to find out whether the boat has even been in the water or if it was built in its present position by an enthusiast who then decided he liked boat-building better than boating.

Whatever the answer, she's a watertight little craft and will be very handy if ever the area floods when the occupied can cast off from the stumps and sail to high ground.

Update Jan 2021: The boat may have been owned by Sam Hawkins and could have been located in Nulu Street.

BACK to her old home after more than 50 years’ service in a variety of jobs, one of Brisbane’s earliest pilot vessels, Cormorant has at last retired.

From 1902 Cormorant was stationed at the southern entrance of Pumicestone Channel, which separates Bribie Island from the mainland.

Eventually Cormorant was replaced and served as a coal barge and gravel carrier on the Brisbane River until she was beached.

Recently, however, the owner of a block of flats on Bribie Island, finding his property threatened by erosion, bought the Cormorant and had her towed to her final resting place. 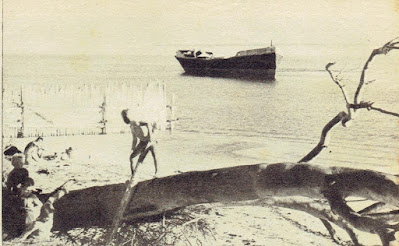 The old ship is now at home only a few hundred yards from the station where she began her career as a pilot ship.