Allied Base at Toorbul Point in WW2

In the 2018 edition (#44) of Bribie magazine Holiday Guide & Business Directory (page 30) is an interesting article Big Allied Base at Toorbul Point in World War 2.

BIG ALLIED BASE AT TOORBUL POINT IN WORLD WAR 2

Further clues have come to light in the intriguing story of the big Allied amphibious training base at Toorbul Point in World War 2, writes Bribie Island war historian and author Ron Donald. (Toorbul Point is the mainland area where the bridge to Bribie Island starts but, in a wartime context, took in the big hillside expanse which is now the Sandstone Point residential area, as well as Spinnaker Sound Marine and extending west to the present-day township of Ningi. Aerial photos in 1943 show the whole camp dotted with army and navy huts and other buildings).

The newly-established Combined Training School (CTS) at Toorbul Point was an initiative of the Australian Army and was under the command of AIF 7 Div. Lieut. Col. Lionel Rose. Its primary purpose was to train Australian troops for amphibious warfare in New Guinea.

Rose compiled a report on the activities of CTS between July 19, 1942 and March 21, 1943, when the establishment was taken over by the US Navy for the ongoing training of sailors and troops for assaults on Japanese-held islands in the Pacific.

The craft used initially by the Australian infantrymen in simulated beach assaults on Moreton and Bribie Island were "contraptions" known as folding boats which could carry about 20 fully-armed soldiers and were towed by commandeered launches manned by RAN personnel.

As time went by, big, high-powered US landing craft began to arrive at the Toorbul Point establishment and the much-maligned folding boats were phased out. They were replaced mainly by Higgins boats able to accommodate 36 soldiers and by LCTs, landing craft 33m long and with a carrying capacity of five 28-tons tanks. 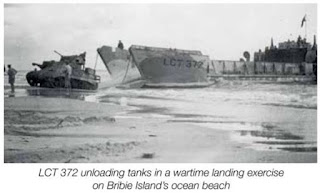 Assaults on Bribie Island's beaches were carried out under simulated battle conditions, including floating smoke screens, machine gun fire on shore and strafing and bombing raids by RAAF aircraft.

In his report, Rose listed the projects which had to be undertaken by Australian Army united before CTS commenced its first course on August 5, 1942. These included the construction of "dummy craft (landing) and a "ship's side"."

While the location of this training facility - in preparation for beach assaults from landing ships - was not specified, Australian soldiers, including artillerymen and tank crews, confirmed after the war how they had clambered up and down landing nets on the "ship's side" which comrades at the bottom swung the nets to simulate the action of a ship rolling in the sea. 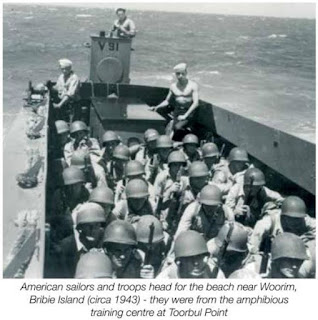 Equally as intriguing is an official Australian Army survey map of the Toorbul Point area compiled in August 1942, which shows a "training platform" on the beach midway between Toorbul Point and Sandstone Point. Was this the site of the "dummy craft and mock ship's side" mentioned in Rose's report?

Recent clues, however, suggest that the Americans, during their occupancy of the CTS area, constructed wharf-like structures along the beach and extending as far around as what is known nowadays as Kal-makuta Drive, near Spinnaker Sound. These structures have disappeared with the passage of time.

A Brisbane businessman nearing retirement recalls exploring the foreshores of Ningi Creek with his younger brother during family holidays in a modest house near the waterfront in the post-war period. He recalled seeing wharf-like structures and tree trunks in which US personnel had carved their names and home addresses.

Another recollection comes from a man, now in high eighties, who visited the camp as a teenage apprentice with his employer to check on the US Navy's refrigeration set-up. His lasting recollection of the visit is that "all the Yanks seemed to be walking around eating ice cream". Surveys for residential development in recent years revealed the location of wells which supplemented the Toorbul Point camp's water supply. Unfortunately, nothing remains of the significant timber structures on the waterfront.

An official report shows that more than 20,000 Australian and US servicemen, comprising infantrymen, commandos, cavalry and artillery personnel and the crews of 28-tons tanks, trained at Toorbul Point. River tanks could be accommodated in the 105 ft (33m) US Navy landing craft at the CTS.

In addition to soldiers, there were 300 RAN personnel at the base in December 1942, and 400 US Navy members at March 21, 1943, when the area was taken over as a US amphibious training establishment. When the Americans left, Toorbul Point became a training area for barges and "soldier-sailor" crews of the Australian Army Water Transport Service prior to their going to the theatres of war in the Pacific.

Retired journalist Ron Donald is the author of numerous articles and three books on wartime Bribie Island. Most recent of these if "The Yanks Called It Terrible Point" - the story of the big Allied amphibious training base at Toorbul Point, Moreton Bay, Queensland, in World War 2.

FURTHER READING
Donald, R. (2010) The Yanks Called It Terrible Point - the story of the big Allied amphibious training base at Toorbul Point, Moreton Bay, Queensland, in World War 2.
Posted by BIHS at 15:53 No comments:

Ever wondered just where those stones on Woorim beach just north of the Boyd Street lookout came from?

They were, in fact, part of a lookout constructed by the army during World War Two when there was fear of a Japanese invasion.  The lookout was situated up on the sand dunes directly behind where the fallen stones are now [1980s] situated.

Constructed on sturdy wooden trunks the stone shelter was believed to have been built around 1941 and was still standing in 1946 when local resident Margaret Campbell took a photo of a friend of hers sitting in front of the lookout.


Margaret said that she wasn't sure when the lookout fell or exactly what happened to it. She said that it may have just worn with age or the dune gave way with erosion over the years.

But the stones and some pieces of the wooden poles can be clearly seen [in the 1980s] on the beach and depending on the tides at times more are uncovered.

If you have any information about the above article or photos or if you have a similar photos that you would like to share, our email address is bribiehistoricalsociety@gmail.com
Posted by BIHS at 17:08 No comments:

A recent phone conversation between the Bribie Island Historical Society's president Graham Mills and a family member of Mrs Mary Schulz led to Mrs Schulz sharing a photo of herself and her brother Stan Tutt at Bribie Island in 1941. Thank you Mary.

Family photo at Bribie Island
May 1941


ACKNOWLEDGEMENT:
We thank Mrs Mary Schulz nee Tutt formerly Reynolds for sharing her photos with us. Mary said, "I will be 100 in September." Thank you Mary.

If you have any information about the above photos or if you have a similar collection of Bribie Island photos that you would like to share, our email address is bribiehistoricalsociety@gmail.com
Posted by BIHS at 13:24 No comments: