Taking advantage of a holiday, a companionable friend, an outboard motor, and a serviceable boat, it was decided to achieve a long-cherished desire, and travel to Caloundra, by way of the Pumice Stone Channel, or Bribie passage as it is more generally termed.

That this waterway was mistaken for a river by its first visitors is understandable, for at the southern end it is an imposing stretch, deep, and at times turbulent. The upper reaches are more often shallow, and the course tortuous, as one portion, known as "The W's" testifies.

Though unrelieved by heights necessary to break the regularity of low islands, whose wooded shores are reflected in the quiet water, the scenery is delightful. Swamps abound where, in season, may be found wild boronia and Christmas bell - the largest and most resplendent of our wild flowers.

On the landward side distant some 12 miles are the bold outlines of Beerwah, Coonowrin, Beerburrum, Tibrogargan, and Tibberwowucum Mountains. These heights, thrown into relief by the morning sun, or silhouetted against a glorious winter sunset, are indeed beautiful.

From seaward, plainly heard across the narrow island, comes a continuous roll of muffled sounds. It is the surf breaking on the outer beach, affording a striking contrast with the placid land-locked waters which provide a home and sanctuary to all bird life.

Here, except at risk of penalty, the killer of the inoffensive may not follow his sport. Herons, curlews, snipe, cormorants, and black swans abound, the latter at times in flocks of hundreds. On the island the air vibrates with the sweet piping of terrestrial birds, whose melody is more pronounced when heard amid the harsh notes which seem to characterise our sea-birds.

One solitary brolga we saw dancing for no apparent reason other than the joy of life, for no mate to whom it might be making demonstrations of courtship was visible. With half-poised wings it pirouetted, now in a grave and stately measure, then breaking into a wild fandango till the noise of our approach warned it that not in all cases was the sanctuary respected. 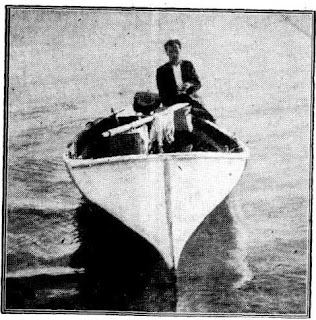 Our boat, 14 feet long and five feet in beam, though well loaded with food, water, benzine, camp and fishing gear, afforded amply room and permitted us to sleep in it with comfort - that is, holiday comfort.

On the second day we made Caloundra, having navigated the Passage without touching a bank and negotiating Suez Canal with mishap. Suez is a deep gutter between two islands, not easy for a stranger to locate, and so narrow that, like its famous namesake, boats even so small as ours could not pass in it. 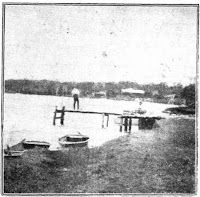 Caloundra is perhaps the most charming of our seaside resorts. Distant some 15 miles from the North Coast railway, lack of good roads, or, better still, railway extension, has retarded its progress. Fine beaches, rocky headland, the open seas on one side, Bribie Island and the quiet passage on the other, gave to this place a natural supremacy.

Here people were universally kind to us. Voyagers in a small boat, we probably presented an unusual spectacle, but from the fisherman who waved us from a wrong course, to the chubby angel of five years bearing a bowl of "pudden" and an invitation from Auntie to bring a billy and get some milk, we experienced welcome hospitality.

The return journey was uneventful but adventure awaited us. One very dark and hazy night we set forth on a fishing expedition and lost ourselves. Familiar objects no longer appeared so and strange features were wrongly recognised as old friends. The benzine gave out and for seven weary hours we pulled that boat.

Daybreak found us at Comboyouro Point, Moreton Island, 15 miles from home. Fortunately the sea was calm but with a heavy ground swell. How we avoided the numerous banks on which we might have been easily and quickly smashed I do not know.

On the following day, in response to our telephonic S.O.S., a motor launch came from Bribie and towed us ingloriously home to find the boat shed will decorated with humourous notices: "Shed for Sale - Owner gone abroad!" "In moments like this you need petrol!"  "Nightly service to Comboyouro!"

The lesson has been learned. Never again will we be caught short on petrol. 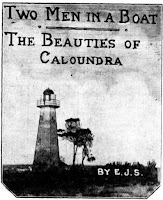