There is a new version of our BIHS brochure with updated details on the Heritage Plaques and Memorials on Bribie Island. 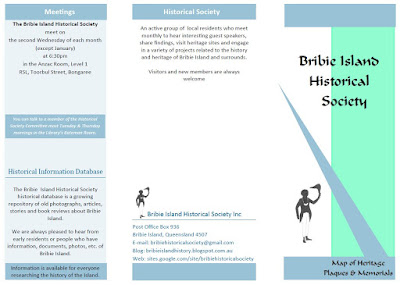 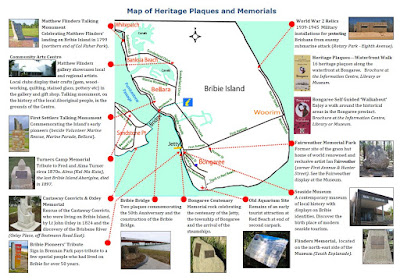 A pdf copy can be found on our BIHS website at https://sites.google.com/site/bribiehistoricalsociety/brochure

The following leaflet was prepared for the 50th Anniversary celebrations on 19 October 2013 by the Bribie Island Historical Society.

Saturday 19th October 2013
50th Anniversary of the Opening of the Bribie Bridge
INFORMATION LEAFLET
Introduction
Today, Saturday 19th October 2013 marks the 50th anniversary of the opening of the Bribie Island Bridge.  The building of the bridge allowed easy motor vehicle access resulting in Bribie Island’s rapid transformation.
While Bribie Island had long been a popular holiday destination the construction of the bridge allowed many people to choose to move here permanently.
Today is an opportunity to celebrate the history of the bridge: its design, its construction, the opening day and the anniversary celebrations that have occurred since.

Bribie before the Bridge
The earliest regular visitors to Bribie Island came by boat following the construction of the first jetty in May 1912 at Bongaree.
A number of steamships including the Koopa and Doomba transported holiday-makers from Brisbane to Bribie Island.
As car travel became more popular after World War II, Mr. Gordon Shields began a vehicular-passenger service between Bribie and Toorbul Point.  Over the years the barge service was operated by a number of different people, with the last operator being Mr. “Snowy” Drenan.  The ability to transport motor vehicles to the Island resulted in considerable home building and community infrastructure activity.

Constructing the Bridge
The idea of a bridge to Bribie Island had been discussed for many years and on 17 November 1959 came an official announcement that the bridge would be built.  It was obvious that the bridge should be located near Toorbul Point where the passage narrows but the exact position was chosen after consideration of such additional factors as the depth of the channel bed, the length of the bridge and approach from each side, and the requirement for driven pile foundations.

On 29 March 1961 it was announced that the contract for the construction of the bridge was let to K.D. Morris & Sons Pty Ltd.  The bridge was built from the mainland across to Bribie Island.  The sequence of each span of the bridge involved pre-cast piles being driven, the reinforced concrete headstocks cast, pre-cast beams lifted into place and the reinforced concrete deck poured in-situ and finally the handrails erected.  The pre-cast concrete elements were supplied by Concrete Industries Pty Ltd.

The construction of the bridge presented a number of unique challenges, one of the biggest being the driving of the long concrete piles.  These piles were up to 85 feet in length and weighed over 12 tons each.  It was necessary for the piles to be driven from a floating platform that remained perfectly stationary, using a ten ton hammer to drive the piles.  As there was no plant capable of achieving this readily available in Australia, a special pile driving frame was mounted on a floating steel barge.

Construction of the bridge gave employment to a work force of up to forty men.  There were no fatalities though several accidents did occur, the most common being men falling into the passage from their lofty footholds.

Opening Day Celebrations
The opening celebrations for the bridge took place on Saturday 19 October 1963.  The events for the day included:

·       A formal opening ceremony with dignitaries and invited guests
The bridge was officially opened by the Premier of Queensland, Mr. Frank Nicklin.  Speeches were given by Mr. Frank Nicklin and Mr. David Nicholson, Queensland Parliamentary Speaker and Member for Murrumba.  Two memorial plaques on the mainland side were unveiled by Premier Nicklin and Sir James Holt, Co-ordinator General.

·       An afternoon tea
The newly built Bellara Motel Restaurant was the venue for afternoon tea for the official party.  A review platform was set up on the front lawn for the Premier and official party to watch the procession.

·       A procession
The procession included: vintage and veteran cars, a horse guard, marching girls, buses, scouts and other local groups crossed the bridge into Benabrow avenue.

·       A Debutante Ball in the evening.
In the evening the Bribie Ambulance Ladies’ Appeal Committee held a Debutante Ball at the Church of England Hall in Banya street.  The debutantes were Yvonne Williams, Brenda Gould and Teresa Clarke.  The flower girls were Michele and Terese Kendall.

Bridge Anniversaries
Over the years there have been several anniversary celebrations held for the Bribie Island Bridge, including 10th, 20th, 25th, 30th and 40th year anniversaries.  While some of the anniversaries coincided with other Bribie festivals others were more low key events.

1973 – 10th anniversary
The 10th anniversary celebrations were held on Saturday 20th October 1973.  The toll was lifted for the day and bridge was closed to traffic while the procession was in progress.

1983 – 20th anniversary
The 20th Anniversary celebrations were held on Saturday 22 October 1983 and coincided with the annual Bribie Island Festival.  The bridge celebrations included a parade, an afternoon tea and a commemorative publication.

1988 – 25th anniversary
The silver anniversary was celebrated with the Bribie Bridge Carnival which was held in October 1988 over five days.  As part of the celebrations there were three commemorative publications, a carnival t-shirt and a display of artwork.

1993 – 30th anniversary
The Anniversary celebration was part of the Bribie Island Aquatic Festival which ran from 15 to 17 October 1993.

2003 – 40th anniversary
For the 40th anniversary a walk was held by the Rotary Club of Bribie Island to raise funds.  Each person of a 10-person team walked four times over the bridge.

Toll
When the bridge first opened there was a toll of ten shillings.  The popularity of Bribie as a holiday destination for people from Brisbane can be gauged by how quickly the toll paid off the loan for the bridge – it took just under 12 years!
The first toll ticket was purchased by Premier Nicklin and the last toll ticket was purchased by Bribie resident Mr. Stan Balmer on 22 March 1975.
The Toll Master for the duration of the toll, 20 October 1963 to 22 March 1975, was Mr. Jack Greenhalgh.

Acknowledgements:  With thanks to Graham Mills, Barry Clark and Donna Holmes for compiling the above information leaflet.  October 2013.
Posted by BIHS at 17:57 No comments:

The following information and photos are sourced from Monument Australia
http://monumentaustralia.org.au/themes/conflict/multiple/display/90586-bongaree-war-memorial

Description:
A monument erected in 1975 commemorates those who have served in the various conflicts in which Australia has been involved.

Two additional plaques were added to the monument on the 31st July 2015 listed those from Bribie Island and Pumicestone Passage who served in World Wars One and Two. 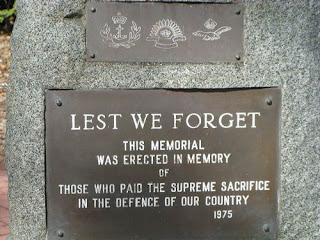 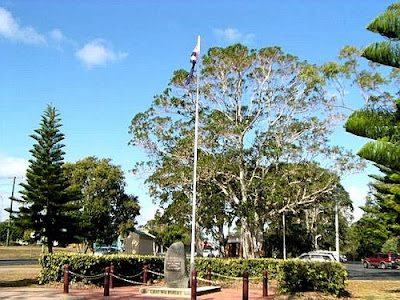 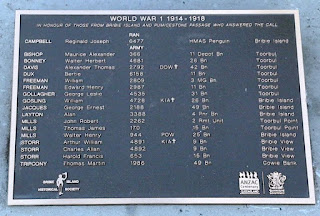 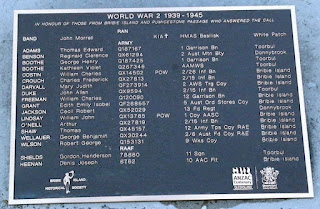 
Acknowledgements: The above photographs by John Huth and Diane Watson, some dated 19 Aug 2015, were supplied to Monument Australia.
http://monumentaustralia.org.au/themes/conflict/multiple/display/90586-bongaree-war-memorial

The following information and photos are sourced from Monument Australia
http://monumentaustralia.org.au/australian_monument/display/100534

Description:
Two plaques commemorating the 50th Anniversary of the opening of the Bribie Island Bridge on Saturday 19 October 1963.

The bridge, which took two years to build, was the longest, pre-stressed, pre-cast concrete bridge in Australia at the time of its construction. Spanning 2736 feet (831.4 metres), the bridge cost $716,321 and had a 10 shilling toll to cross it.  The bridge was officially opened on Saturday 19 October 1963 by the then Premier of Queensland, Frank Nicklin. 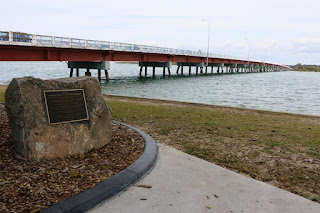 This plaque commemorates the opening of the Bribie Island Bridge on 19th October 1963, a significant event in the development of the island.  From 1912 when the Bongaree Jetty was built, visitors came on steamship "excursions" before roads & motor cars became popular in the 1940s.

A car ferry was then the required transport from the mainland opposite. 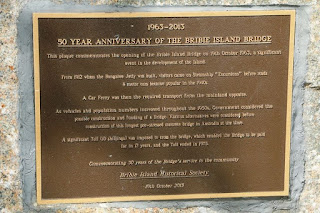 As vehicles and population numbers increased throughout the 1950s, Government consider the possible construction and funding of a bridge.  Various alternatives were considered before construction of this longest pre-stressed concrete bridge in Australia at the time.

A significant toll (10 shillings) was imposed to cross the bridge, which enabled the bridge to be paid for in 12 years, and the toll ended in 1975.

Commemorating 50 years of the Bridge`s service to the community 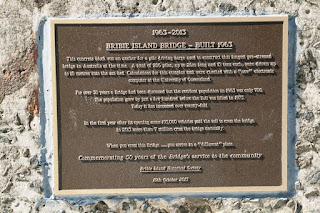 This concrete block was an anchor for a pile driving barge used to construct this longest pre-stressed bridge in Australia at the time.  A total of 206 piles, up to 26m long and 12 tons each, were driven up to 10 metres into the sea bed.  Calculations for this complex task were checked with a "new" electronic computer at the University of Queensland. 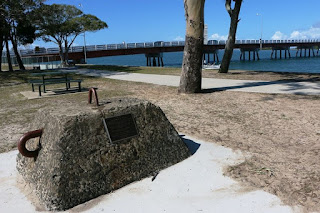 For over 30 years a bridge had been discussed but the resident population in 1963 was only 700.  The population grew by just a few hundred before the toll was lifted in 1975.  Today it has increased twenty-fold

Acknowledgements:
The above photographs by John Huth dated 13 Sep 2014 were supplied to Monument Australia.
http://monumentaustralia.org.au/australian_monument/display/100534

Centenary of Bongaree Jetty May 2012

Centenary of Bongaree Jetty - May 2012

The following information and photos are sourced from Monument Australia
http://monumentaustralia.org.au/themes/culture/community/display/104377-centenary-of-bongaree-jetty

Description:
Commemorative bronze plaque on large stone at the end of the Bongaree Jetty, unveiled for the Jetty's centenary (1912-2012) in May 2012. 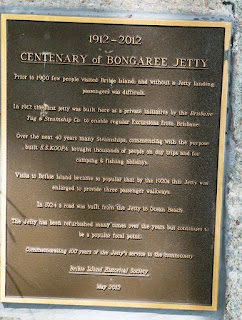 Prior to 1900 few people visited Bribie Island, and without a jetty landing passengers was difficult.  In 1912 the first jetty was built here as a private initiative by the Brisbane Tug & Steamship Co. to enable regular excursions from Brisbane.

Over the next 40 years many steamships, commencing with the purpose S. S. Koopa brought thousands of people on day trips and for camping & fishing holidays.  Visits to Bribie Island became so popular that by the 1920s this jetty was enlarged to provide three passenger walkways.

In 1924 a road was built from the Jetty to Ocean Beach.  The jetty has been refurbished many times over the years but continues to be a popular focal point.

Commemorating 100 years of the jetty`s service to the community 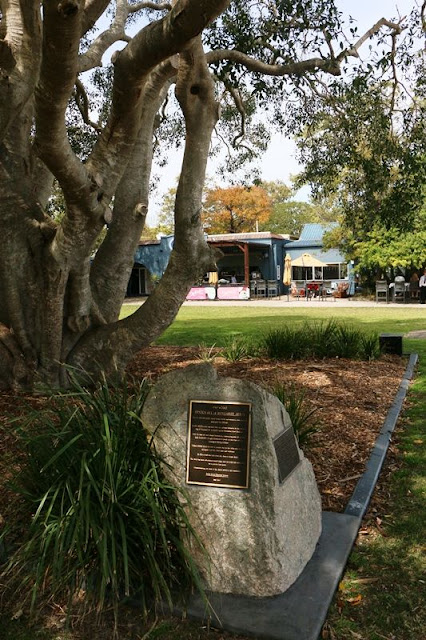 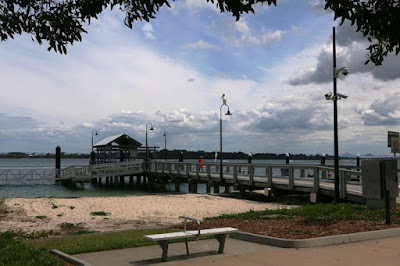 Acknowledgements:
The above photographs by John Huth dated 13 Sep 2014 were supplied to Monument Australia.   http://monumentaustralia.org.au/themes/culture/community/display/104377-centenary-of-bongaree-jetty