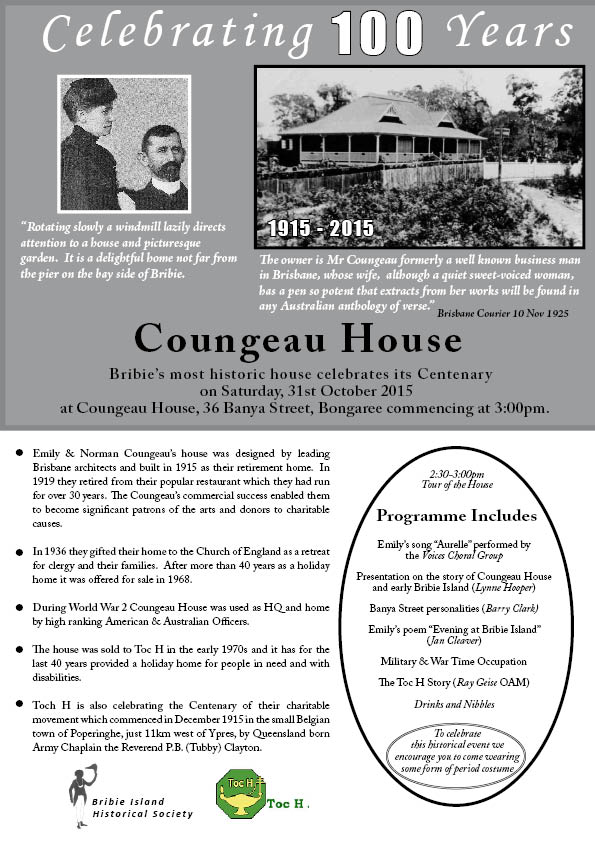 An article on the current caretakers of Coungeau House, Jan and Bob Cleaver, by Brad Penfold, entitled A house of sanctuary for those in need, was published on the Toowoomba Chronicle webpages on 26 Dec 2104.

'Nan's' childhood on Bribie Island circa 1900

Inspired by the memories of his late Grandmother, Mike Harris contacted the Bribie Island Historical Society and has written the following account of his families time on Bribie as virtually the only residents between 1898 and 1908.

These are Mike Harris's memories of his grandmother Florence Anne Gregg (nee Bowles) who he refers to as “Nan” in this story.

Her father William Bowles was born at Kangaroo Point, Brisbane on 25th June 1859, some months before the “Colony of Queensland” separated from New South Wales to become a State in its own right.

On 22 June 1889, Nan's father married her mother Anne Sigley, and they had 10 children. Soon afterwards, Nan's father who was a Fisherman and Oysterman, was offered the job of managing the Bribie Island oyster leases owned by James Clark, also known as “The Pearl King".

In 1898, when Florence (Nan) was just 4 years old, the whole family joined their father on Bribie Island, when his occupation was officially listed as “Oysterman”,  and when Oystering at Bribie Island was Queensland’s largest industry.

Nan and her family lived in a timber homestead somewhere in the vicinity of Poverty Point near the creek there.  At that time, there was only one other permanent settler living on the Island.

In spite of their isolation, it was still a very good life because Nan often spoke of the wonderful freedom and happiness, which she and her family enjoyed on the Island. They were all very happy, even though it may seem quite difficult by today’s standards.

The men toiled hard, working on the Clark Company’s oyster leases from dawn till dusk, six days a week, and the women cooked on wood stoves, washed the clothes by hand, and after dark, used Hurricane (kerosene) Lamps and Carbide (gas) Lamps as their only means of lighting.

Nevertheless, Nan and her sibling’s days were filled with wonder and great adventure as they explored the vast lonely beaches and dense bushland on the Island.   Nan boasted of the great fishing and how they caught large “Muddies” (Mud Crabs) in their dillies, and not the “nuisance Sandies” (Sand Crabs), which they tossed back.   What a wonderful privilege it must have been to have lived on the Island in those days, experiencing all of its natural beauty, untouched landscapes, pristine environments and eating the fresh and ever abundant seafood.

A small group of Aborigines existed on Bribie Island in those days and Nan said they got on reasonably well with the new settlers.

I believe they were of the Djundubari Tribe, and the government had established an Reserve for them in 1877 at Whitepatch, but it did not last very long.

The boat that picked up the harvested oysters travelled up from Brisbane every fortnight.   Prior to the boat’s arrival, the workers would have the job of removing the oysters (left sealed in their shells) from the rocks, and storing them temporarily on a large movable platform that was lowered below the tide level to keep them alive, until they were ready to be packed for shipment.

At packing time, the oysters were loaded into wooden boxes with wet sawdust around them to keep them moist, cool and fresh for the trip.   Packed in this manner, Nan said that the oysters would keep for at least 2 weeks for a trip to Melbourne.   The oysters were sent expressly for wealthy Dinner Tables and the “Well-to-do Restaurants” of the 1890’s in Melbourne.   In those days Melbourne was a rich and vibrant city made affluent by the enormous wealth derived from the Victorian Goldfields.   Nan said that the James Clark Oyster Company was a hive of activity just before the boat’s arrival, as they would raise the movable platform, remove the oysters, pack them into the boxes, and then cart them to the jetty, ready for shipment to Brisbane before being sent south.

Nan’s father died of a heart attack in 1908, which would make him only 49 years old at the time.   Nan believed his early death was caused by all the hard and exhausting work he did as a Fisherman and an Oysterman.   After his death, the whole family moved to Brisbane, into a house they purchased on River Terrace at Kangaroo Point.

On one such holiday in 1958, Nan and Eileen visited the location of the old James Clark Oyster Company leases, only to discover that their old timber homestead had collapsed and rotted away.   All that was left were the rusted remains of the wood stove that her mother had cooked on.   I remember Nan showing me those rusted scraps of cast-iron, which they brought back as souvenirs to Brisbane.   Such were their loving and happy memories of past times on Bribie Island that they brought home these little treasured keepsakes.

Over the years, Bribie Island has seen many changes.  I can still remember it way back in 1953, well before the bridge was built, whilst on holidays with Nan and other family members.  We caught the “SS Koopa” steamship to Bribie Island run from the Custom’s House Wharf in Queen Street, Brisbane.

Now, whenever I visit Bribie Island, I think of my Nan who lived there as a girl so happily but in such isolation over 117 years ago.   Every visit seems like a pilgrimage to a much Hallowed Place, to remember the past lives of Nan and her family and recall their wonderful and happy experiences as new settlers to the Island.

What about your own family links to old Bribie Island ? If you have any interesting family connections or old photos of Bribie Island please contact the Historical Society on bribiehistoricalsociety@gmail.com
Posted by BIHS at 16:10 No comments: