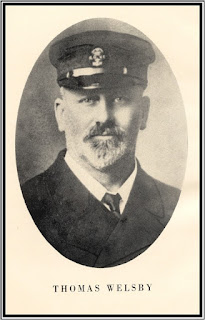 > Joined the Bank of New South Wales in Brisbane in 1874, resigned as ledger keeper in 1879 to join the Australian Joint Stock Bank in Brisbane and in 1884 left there to practice as a public accountant, trustee and auditor and became a member of the Brisbane Stock Exchange.

* His last book written at the age of 80 was titled “Bribie the Basket Maker”. Welsby had a home on Bribie Island and in 1937, following the Great Depression, he wrote a romantic legend about a convict who fell in love with a native Princess on the island. This helped to regenerate interest and promote tourism prior to World War 2.

* Thomas Welsby loved history and was Foundation Honorary Treasurer of the Historical Society of Queensland: in 1913, he served as Vice– President for 23 years from 1917 until his death in 1941, and had a year as President in 1936-37.

. Welsby was a keen sportsman and was manager and half-back for Queensland’s first intercolonial Rugby Union team which played in Sydney in 1882. He helped to revive the code in 1928, was a life member of the Queensland Rugby Union, President 1929-1939 and donated the Welsby Cup.

. Welsby was Foundation Secretary of the Brisbane Gymnasium in 1882, sponsored boxing matches and formed the Queensland Amateur Boxing and Wrestling Union in 1909.

. Welsby was a Founding Vice-President of the Amateur Fishermen’s Association from 1904, which established a base on Bribie Island. He was Founding Member of the Royal Queensland Yacht Club in 1885 and Commodore in 1903-1919. 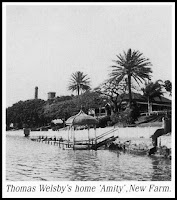 Thomas Welsby had much sadness in his life. His father and two brothers had died by 1879.

His wife Margaret Gilchrist, nee Kingston, whom he married on 21st February 1893 at East Brisbane, died ten years later.
His only son died in childhood. Survived by two daughters, he died on 3rd February 1941 at New farm, Brisbane.

Welsby built a home which he called “Amity” in 1892, near the River at New Farm. He moved into the house in December 1892 and in February 1893 endured the disastrous floods, which came within inches of the verandah.