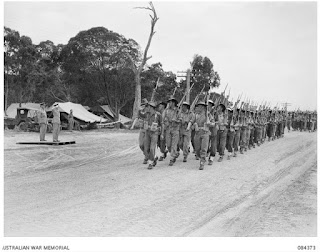 19 Dec 1944, Toorbul Point. Works Company members participating
in the march past. The salute was taken by Brigadier H. Wrigley,
Commander 1 Base Sub area. [1]

Did not proceed overseas. The 9 Aust Works Coy was employed along the Lines of Communication area of northern New South Wales and southern Queensland.

Life Summary:
Robert Wilson (1899-1971) was born 16 Sep 1899 in Brisbane, the only son of George Wilson (1860-1904) and Frances Williamson Johnstone (1872-1928). By 1926, Robert Wilson was living in the Bribie Island area and took up employment with local fishermen Cec Campbell and Reg Campbell. After Reg Campbell opened his store on South Esplanade in 1932, Robert Wilson (as he had his own truck) made deliveries for Campbell’s store.[2]

Robert Wilson had been associated with Bribie Island for over 50 years when he died 22 Jul 1971, aged 71. He was buried at Toowong Cemetery.