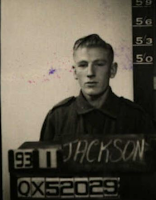 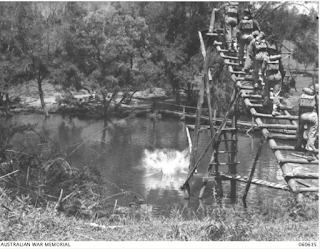 25 Nov 1943, Canungra, Qld. Troops with a full kit jumping off
a twenty-foot-high platform into water at the Australian Training Centre. [1]

Did not proceed overseas.

After his military service, Cecil settled at Caloundra (his maternal grandmother Elizabeth Mary Drew lived at Toorbul).  By 1959 he had moved to Brighton where he worked as a labourer. Cecil died 2 Sep 1994, aged 70, and was buried at Redcliffe Cemetery.[2]