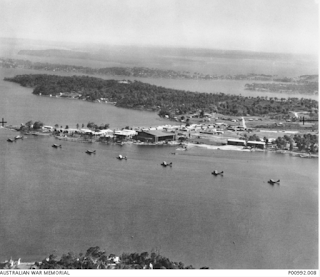 1945, Rathmines, N.S.W. An aerial view of RAAF Rathmines showing
the hangars on shore with Catalina aircraft moored in the lake.[1]

Service Summary:
5 Oct 1942: Motor Boat Crew, No. 11 Squadron, R.A.A.F. Served at Evans Head, Rathmines and Sandgate. Gordon Shields was restricted to these areas as he was unfit for tropical service.

“No. 11 Squadron was formed as a general reconnaissance squadron at Richmond in New South Wales on 21 Sep 1939.[2]  In February 1942 No. 11 Squadron was withdrawn to RAAF Base Rathmines following the Japanese air attacks on Port Moresby. Due to the Catalina’s ability to travel large distances it continued to carry out patrols in the waters around New Guinea.[3]  Towards the end of 1942 the unit relocated to Cairns and commenced night raids against enemy shipping and submarines attempting to land supplies around Lae, Salamaua, and Finschafen. Unit Catalinas mined enemy harbours and dropped supplies to coastwatchers in the Solomons, New Britain, and New Ireland between April and July 1943.”[4]

After his military service, he started a barge service between Toorbul Point and Bribie Island, was a foundation member of the Bongaree Bowls Club and managed the Greenwood Tree Flats for two years. His boat shed at Bongaree was a landmark for many years. 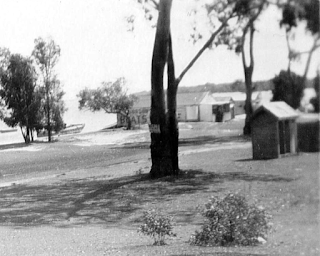