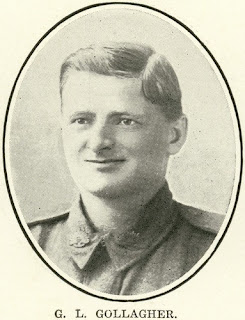 “In early 1917, the German Army withdrew to the Hindenburg Line allowing the British front to be advanced and the 31st Battalion participated in the follow-up operations. The battalion subsequently missed the heavy fighting to breach the Hindenburg Line during the second battle of Bullecourt as the 8th Brigade was deployed to protect the division's flank. The only large battle in 1917 in which the 31st Battalion played a major role was Polygon Wood, fought in the Ypres sector in Belgium on 26 September.

Unlike some AIF battalions, the 31st had a relatively quiet time during the German Spring Offensive of 1918 as the 5th Division was largely kept in reserve. The Allies launched their own offensive with the battle of Amiens on 8 August, in which the 31st Battalion participated. It was subsequently involved in the operations that continued to press the retreating Germans through August and into September. The 31st fought its last major action of the war in September 1918 when the 5th and 3rd Australian Divisions, and two American divisions attacked the Hindenburg Line across the top of the 6-kilometre-long St Quentin Canal tunnel; the canal was a major obstacle in the German defensive scheme. The 31st was resting and retraining out of the line when the war ended on 11 November 1918. It disbanded in France on 21 March 1919.” [2]

7 Aug 1919: Returned to Australia from London on HMAT A8 Argyllshire, arriving Melbourne on 22 Sep 1919 and then transferred to Brisbane by train. 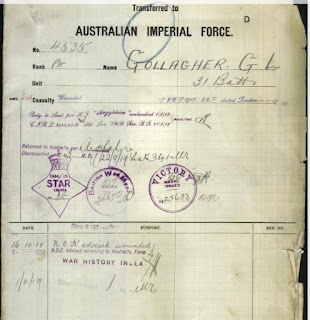 After his military service, George Gollagher returned to his family home at Toorbul. By 1926 he had moved to Nundah and on 18 Dec 1926 he married Jane Edge and they settled at St Lucia where George worked as a labourer. The couple would have no children. They celebrated their twenty-fifth wedding anniversary Christmas 1951 and Jane Gollagher, aged 59, passed away the following year.

George, aged 70, died 17 Jul 1964 at Greenslopes Repatriation Hospital and has a memorial at Mt Thompson Crematorium.

Email ThisBlogThis!Share to TwitterShare to FacebookShare to Pinterest
Labels: They Answered The Call, World War 1