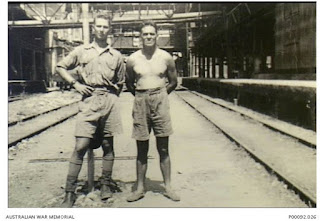 26 Dec 1940: Embarked from Sydney on Queen Mary for Middle East.

23 Jan 1943: Embarked from Egypt on Acquinata for Australia.

“The 2/15th Infantry Battalion was raised at Redbank army camp in Brisbane on 1 May 1940, as part of the 20th Brigade. The battalion did its basic training at Redbank and went to Darwin to undertake three months of garrison duty in July. It moved to Sydney in November and at the end of the year sailed aboard the Queen Mary with the 20th Brigade to Palestine via India, transhipping to the Rohna at Bombay.

The 20th Brigade transferred from the 7th to the 9th Division en route to the Middle East. It arrived at El Kantara in Egypt at the start of February 1941 and moved to Kilo 89 in Palestine for desert training. At the end of the month the 2/15th travelled through the Libyan Desert to the front line at Kilo 789 near Mersa Brega, including Mersa Matruh, Bug Bug, Tobruk, Derna, Tocra, Benghazi, and Agedabia. The battalion relieved elements of 6th Division, becoming the most advanced part of the line.

The 2/15th moved to Gabel El Gira on 27 March and then Barce. German forces had landed at Tripoli and were advancing east. It was involved in the withdrawal of British forces to Tobruk, referred to as the "Benghazi handicap". The withdrawal cost the battalion heavily: the commanding officer, second in command, and 154 men were captured at El Gazala.

The battalion moved to Hill 69 near Gaza where it remained into 1942, before undertaking training and garrison duties in Lebanon and Syria.

In early July 1942 the Second World War in North Africa became critical for the British Eighth Army, when Axis forces reached El Alamein in Egypt. The 9th Division rushed from Syria to the Alamein area and held the northern sector for almost four months, while the British Eighth Army reinforced under new a commander. 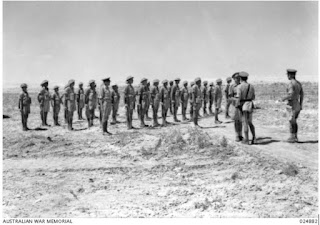 The 2/15th relieved the 2/28th Infantry Battalion, holding the line from Hill 33 to the coast throughout August. On 1 September the 2/15th participated in Operation Bulimba, designed to test tactics and strategies for the upcoming battle. The fighting was vicious and the battalion suffered 183 casualties - about half its fighting strength. From 23 October to 4 November it fought with the brigade during the battle of Alamein.

The 9th Division was recalled to Australia to face a new enemy - the Japanese. The 2/15th left Egypt aboard the Acquitania on 25 January 1943 and disembarked at Sydney on 27 February. After leave and jungle training on the Atherton Tablelands in Queensland it embarked for Milne Bay in Papua on 2 August 1943.

On 4 September the battalion landed on Red Beach, 15 miles north-west of Lae. Shortly after it fought its way ashore at Scarlet Beach near Finschhafen and defended the area against Japanese counter-attack. The battalion also took part in the Huon Peninsula campaign, advancing along the northern coast of New Guinea from Lae to Sio.”[3]

Life Summary:
John Allen Duke (1919-1975) was born 14 Sep 1919 in Kent, England to Thomas Kelsey Duke (1894-1960) and Ada May Webb (b. 1896). The Duke family emigrated to Australia in 1925 and took up land at Meldale near Toorbul on Pumicestone Passage. Tom Kelsey Duke named his property Creeklands because it was bounded by Bullock Creek on the north and Elimbah Creek on the south.

After his military service, John returned to Creeklands and his occupation of farmer. In 1952 he married Ailsa Hazel Hardy (1930-2007) and the couple raised their family at Creeklands.

John Duke died 12 Aug 1975, aged 54, and was buried in King Street cemetery, Caboolture where there is a memorial plaque for him and later for his wife.

John Duke is fondly remembered by his younger sister Hazel Bishop nee Duke. Hazel Bishop now lives on Bribie Island and is very proud of John’s military service, particularly his service as a “Rat of Tobruk”. 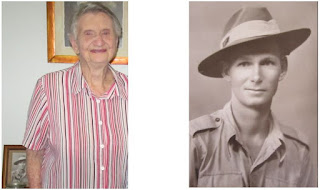 Hazel Bishop nee Duke, aged 93, in her home on Bribie Island, 9 Mar 2017, and on the shelf
is a framed photo (1940) of her beloved brother John Duke in his soldier’s uniform.