What's in a name
Parks on Bribie
by Barry Clark
Bribie Island Historical Society
Have you ever wondered why the park you walk through or exercise your dog in has that funny name? I think it is important to recognise and remember those who have contributed to the islands history, so this month I have written about just four public parks in different suburbs to explain how they were named.

A few recently erected park signs do have informative words on them that help residents and visitors appreciate why they are so named, but why not all of them? They provide background information for residents and visitors to appreciate those who made valuable contributions to the island over the years, and were recognised by having a park named in their honour. In most cases they were named some years ago to honour people who now seem to be forgotten. It seems to me that they may just as well be called Park A, B or C if the names no longer have any meaning.

There are parks in all Bribie suburbs that have the name of an organisation, group or event, but many have been named for specific people. Here is just a bit of information about some Park names that may add value and interest for you. If you would like to know more about the name of a Park or Street please contact us on bribiehistoricalsociety@gmail.com 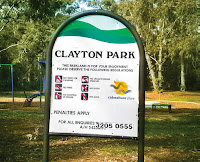 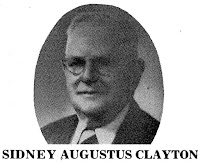 SIDNEY CLAYTON worked in the Caboolture Dairy industry until he retired and in 1952 and was then elected Chairman of the Caboolture Shire Council. He served as Shire Chairman for 12 years during which time both the Bribie Water Supply and the Bribie Bridge were constructed. When the Bribie Island Bridge opened on 19th October 1963 the Government imposed a substantial Toll which lasted for 12 years until the bridge was paid for.
Following the opening of the Bridge the new suburb of Bellara developed and this park recognises Sidney Clayton being the Shire Chairman at that time. This park became the roost for millions of bats a few years ago causing problems for residents. 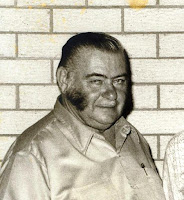 EDWIN SCHRAG represented Bribie on the Caboolture Shire Council for 8 years from 1971 to 1979. He lived at Woorim and ran his Real Estate business at Bongaree. Over many years he served the Bribie community in the Lions Club and Chamber of Commerce, and from 1976 to 1982 was founding President of the Golden Age Centre. In 1976 the Bribie community staged a major fundraising stunt to secede from Queensland and become our own “Republic of Bribie Island”, with Edwin Schrag as President, and his wife Phyllis as First Lady. This park recognises the significant contribution he made to the island. 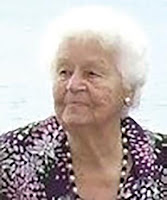 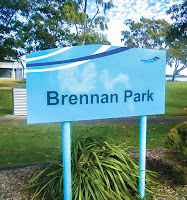 BERNIE & SALLY BRENNAN came to Bribie Island in 1941, and after the War opened a General Store in the front of a wooden cottage at No 7 Toorbul Street. Brennan’s Store provided the basic needs of the few residents and the thousands of holiday visitors who camped in canvas tents in this park and all along the Bongaree Foreshore. In 1958 the shop became the islands first Golden Casket ticket agency, and sold the winning First Prize ticket to a local resident in 1965. Brennan’s Store served the community for 33 years until 1978, and over all those years Sally washed the kit for the Surf Club volunteers until her death in 2011. This park sign was recently damaged in an accident. Council have now installed a new one with appropriate wording added. Thank you. 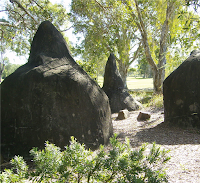 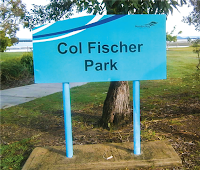 Colin and Bry Fischer were early residents of the new Solander Lake development at Banksia beach from 1979. Their agricultural background resulted in their home garden on Solander Esplanade becoming a colourful showpiece of flowers and shrubs, winning many garden competitions, and being awarded “Best Garden in Caboolture Shire” on several occasions. Over their 22 years living here they witnessed the initial development of Solander Lake, which eventually grew to become the extensive canal developments of Pacific Harbour. They contributed thousands of volunteer hours to planting and beautifying the Foreshore area of Banksia Beach, and installing the Glasshouse mountain models in the Park named in his honour. I assisted Col to document his history of Banksia beach, but he died in June 2011 just before his book was published and launched by Bry at the Historical Society.

ACKNOWLEDGEMENTS:
This article was published in The Bribie Islander, issue 48, July 2018, page 36.  thebribieislander.com.au
Posted by BIHS at 22:12