A copy of the map for the Bongaree Waterfront Walk can be found at
http://bribieislandhistory.blogspot.com.au/2016/01/bribie-heritage-plaques-walk.html

There are  references to guest houses and kiosks that catered for the tourists arriving on the Steam Ship “Koopa” as early as 1915.

Guests disembarking from either the “Koopa “or the “Doomba” would be met at the jetty by the proprietors of the guest houses and assisted with their luggage.  The walk along the Esplanade at this time was a sand track through grass and trees.

There were as many as six guest houses as well as private homes, along South Esplanade.  In those early days the sand track of South Esplanade continued further south, following the beach, past the Amateur Fisherman’s Association headquarters cottage.  In the 1950s  and 1960s cyclones caused extensive erosion and the road was eventually washed away, and now turns inland at Renton Lane. 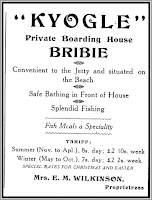 For those who chose not to pitch their tent along the foreshore, the choice of guest houses along South Esplanade provided a more comfortable alternative.

“Glan-y-Mor” was another guest house  run by Bob Davies for board and residence in conjunction with his twin sisters, Rose and Lil, situated a little further away on the corner of Campbell and Banya Streets.  When the main residence was fully occupied, external accommodation was provided in the form of thatched roof open air shed with an added luxury of drop down mosquito nets for protection against midges and “mossies”.

The Davies family also had a kiosk at the jetty and established “Novelty Gardens” around Glan-y-Mor  which featured shapes of animals carved and trimmed from young pine trees, which quickly became a tourist attraction and a garden venue for Rose and Lil to entice visitors for a cup of tea.

Their dining room was renowned for their pea and ham soup and fresh fish dinners.