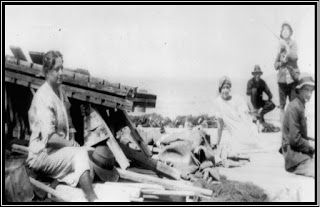 
Why invest in Bribie in 1910?
> Perhaps Mrs Balls knew Norm Congeau, a wine merchant at Fortitude Valley, who would build a fine house built in Banya Street a few years later.
> Maybe she knew of the plans of the Brisbane Tug and Steamship Company to have the excursion steamer “Koopa” built and a jetty constructed at Bongaree.
> Perhaps she was an intelligent and courageous woman with ideas ahead of her time.

Who was Mrs Balls?
> Mrs Sarah Balls (nee Sarah Blasdale) of Hamilton was the enterprising widow of a Scottish builder and publican John Irwin Balls .
> After his death she ran hotels and was the proprietor of several railway refreshment rooms.
> In 1910 she bought a fish cannery located on the northern part of Bribie Island and transferred it to the south near the newly established settlement at Bongaree.
> She expanded her business interests by establishing a small farm just north of the cannery but crops of asparagus and pineapples were not successful.
> The fish cannery closed in 1914 due to shortage of tin, shortage of fish and increased taxes.
> Some years later the cannery was dismantled and moved to Brisbane as a jam factory.
> A few old pile holes from the jetty may still be seen in the rocks at low tide.

How did the Cannery Work?
> Mr Crouch managed the cannery. Bill Wright was the foreman. Other employees included Peter Rich (known as “Peter the Gutter” and also the “Groper King”), “Hoppy” Dixon (who had one leg shorter then the other) and “Gotch” who boiled down fish heads and bones to extract oil and gathered the residue to make fertiliser. The work was hard and the wages were low.
> The cannery building was 45m x 15m and housed an engine, boiler, retorts and storage space.
> In front of the building was a 12m jetty where fishermen delivered their catch of mullet, snapper, squire, bream and flathead. The fish were scaled, cleaned and filleted before being wheeled by trolley to the factory.
> The fish pieces were arranged in 450 gram tins and a pinch of salt added. The tops were crimped and soldered to each tin before being placed in a retort under pressure.
> Tins were checked for leaks before being labeled with the “Diver Brand”. Forty-eight tins were packed in each case and twenty-four cases were produced each day.
> There was a ready market in Brisbane for the canned fish which were transported by boat.
> The canning business was forced to close in 1914 because of a shortage of tin as World War I had started. The building was later moved to Brisbane to continue its life as a jam factory.

What happened after the Fish Cannery closed?
> Some employees stayed on Bribie Island and started the net fishing industry. They continued to buy biscuits and tinned goods from Alfred Hall, a Brisbane shopkeeper, who owned and visited his small house in Bongaree on weekends and brought supplies with him at their request. His business interests on Bribie expanded.


> In 1930 Mrs Balls had one of the most expensive homes in Brisbane “Santa Barbara” built at New Farm. She lived at “Santa Barbara” and maintained her keen interest in business until her death in 1932. 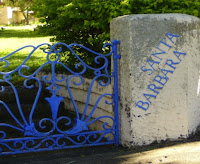