A wonderful online resource for researching local history is Trove, provided by the National Library of Australia, particularly Trove's access to digitised copies of Australian newspapers. Many a happy hour can be spent looking through articles and advertisements from a bygone era and occasionally, photos sprinkled through the article delight and entertain the reader!

Such a series of articles appeared in The Telegraph in the latter part of 1936 when journalist A.E. Simmons covered the emerging tourism industry of south-east Queensland.  The final article in the series, published in December 1936, was on Bribie Island, and though it was written to entice "new tourists" in 1936, it gives today's reader a glimpse of Bribie Island as it was 80 years ago. 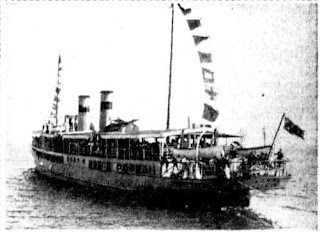 "It is almost unbelievable that Bribie Island, with all that it has to offer the holiday-maker, has remained, until recent years, almost unknown to the citizens of Brisbane.  Situated on beautiful Moreton Bay, and only 36 miles by sea from the Custom House wharf, the commodious steamship Koopa, belonging to the Brisbane Tug and Steamship Co. Ltd., in command of Captain J.S. Johnson, reaches it in about 3 hours.  . . . 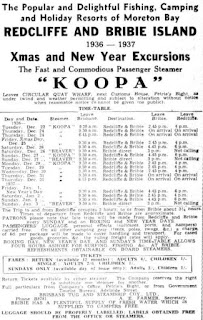 The journey down the Brisbane River and across Bramble and Deception Bays is a most enjoyable one.  Each wind of the river presents a picture of fresh charm, many steamers (overseas and coastal) and sailing and motor boats adding their quota to the life of the river and bay.  The many beautiful homes with their well-kept gardens in New Farm, East Brisbane, Bulimba and Hamilton complete a picture of rare charm, some of these homes being amongst the finest to be found in Brisbane.
After passing Lytton, with its fort and quarantine station, we see St. Helena and the white sand hills of Moreton Island on the right.  The steamer turns north almost opposite Fisherman Island, with Bishop's or Wreck Island on the east, and proceeds through the Old Channel and past the Old Pile Light.
On the left we pass Cribb Island, Nudgee Beach and Sandgate nestling in Bramble Bay, and in the distance, to the north-west, we see the Hornibrook Highway with its high pylons, connecting Sandgate with Clontarf on the Redcliffe Peninsula.  We next pass Woody Point and Scott's Point with their charming beaches, the steamer calling at Redcliffe jetty to embark passengers for Bribie Island.
Leaving Redcliffe, the steamer proceeds past Scarborough and across Deception Bay, reaching Bribie jetty, in the Pumice Stone Channel, about 50 minutes after leaving Redcliffe.

BEAUTY OF THE BAY
The beauty and charm of Moreton Bay have been described on numerous occasions.  Suffice it to say that in few parts of the world can such charming and varied scenery being found - the background of hills adding a charm beyond description.
Bribie Island is approximately 26 miles long and three miles wide.  . . .   At the southern end (Boat Jetty) is Bongaree, and on the ocean beach side (surfing beach), about three miles distant and connected by a good metaled road is Woorim.  . . .
The island is a most pleasant spot in which to spend a restful holiday.  Unlike most holiday resorts, it has somehow managed to retain its natural charms, and the proclaiming of the island as a sanctuary has certainly helped to preserve the bird and animal life which would otherwise have been completely wiped out.
Bribie Island boasts that it has something to attract all types of holidaymakers - the fisherman, the swimmer, the surfer and the lover of nature.
The western coast of Bribie Island, at the southern end of which is Bongaree, is one of the oldest fishing resorts in Moreton Bay.  Here, in the far-famed Pumice Stone Channel, squire, whiting, flathead and bream are to be found in season, which oysters and crabs abound.  This place is the Mecca of the fisherman, and those who have once tasted of its charm return again and again to the old haunts.
Safe swimming and paddling for children can be enjoyed in this district, the youngsters delighting in the clean sand to be found here.
There are several old residents in the district who have resided here practically all their lives.  One of the oldest is Mr. E.H. Freeman who now lives on the mainland side of Pumice Stone Channel, a short way up Ninghi Creek.  I understand this gentleman has spent about 68 years in and around Bribie. . . .


ACCOMMODATION AND SPORT
There are many good camping reserves at Bongaree, and furnished and unfurnished houses and flats are available for those preferring same.  The family man could choose no more pleasant spot in which to spend a holiday with his family at a reasonable cost.  The fare is the cheapest in Queensland, and all supplies may be obtained at prices that compare favourably with those in the capital cities.

There are several tennis courts and bowling green set in delightful surroundings, and visitors are always welcome to enjoy their favourite sports.  There is also a fine cricket pitch, and dances are held several times a week during the holidayseason.  For those fond of riding, horses may be hired for the purpose, and many beautiful spots may be visited by this means.  The hiker will find himself in a veritable paradise, fresh pastures with most delightful surroundings beckoning him in all directions.


A place of interest that should on no account be missed by visitors to Bribie Island, is Davies' ornamental gardens, situated a few hundred yards from the jetty at Bongaree.  These gardens, which were founded by the late Mr R.J. Davies, are now carried on by his family and show the artistic temperament of the founder.  Here are many specimens of statuary in cypress pine, the only tools of trade of the artist being an ordinary pair of garden clippers and pieces of string.  To see these gardens flourishing in the pure sand, is simply a revelation.  The most striking design is one depicting the Australian coat of arms, the kangaroo, emu and shield being perfectly executed.

A favourite design, especially with juveniles, is "The Bribie Limited," which is a model of a train, with an engine and six coaches attached.  As the visitor moves from tree to tree he cannot but marvel at the amazing patience that must have been required for the successful carrying out of the work.  There are dozens of models, including Phar Lap, Cleopatra's Needle and many others too numerous to mention, but all well worth seeing.  Visitors are always welcome, and the Davies family are proud of the many letters of appreciate they have received from distinguished visitors.
There are many charming homes on the island, and one of the most beautiful is that of the late Mr and Mrs Congeau, which was handed over to the Church of England, together with its contents, for use as a rest home for members of the clergy and their wives.  This home was opened on November 3 last by Archbishop Ward, and with its glorious gardens is much appreciated by those who avail themselves of same.
At Bongaree is the home of the Amateur Fishermen's Association, and here they have a fine club house which is always well patronised by its members.
On the east coast of Bribie Island, about 3 miles from Bongaree, is Woorim, which is easily reached by motor bus along a good metalled road, built by the Brisbane Tug and Steamship Co. Ltd., as a cost of over £8,000.  Here is the finest stretch of surfing beach in Queensland, if not in Australia.  For a distance of about 26 miles, this beach stretches from Tripcony's Beach, about 2 miles from Bongaree, to the northern end of the island opposite Caloundra.  It is a safe,  . . . beach, free from sharks and above all, . . .  The breakers are just ideal for surfing, not too boisterous, but gentle . . . and surfing can be enjoyed here at all seasons of the year, even during the winter months.  The entire stretch of beach is of the hard sandy variety, and a walk or drive along here is most enjoyable.  When the tide recedes the beach is strewn here and there with thousands of small shells which will delight . . . the youngsters.

BEAUTY SPOTS
The island abounds in beauty spots, lagoons, creeks, and plains covered with wildflowers, especially boronia and Christmas bells, the latter growing to a huge size, the white heath completing a glorious picture.  At every period of the year wildflowers of one kind or another are in bloom, and the plains on which they grow are easily accessible from either Bongaree or Woorim.  Bush orchids grow here in all their glory, and a feature of the fauna is the bridal bush which grows to a height of 12 feet and is a mass of white and yellow.  Wild hops grow on several parts of the island, and pines, dark cypress, and banksia are some of the principal trees which flourish here.
Along the beach there are many fine specimens of casuarinas or horse-tailed oak trees, and these trees grow practically along the entire length of the beach.
The lagoons, of which there are four on the island, are of outstanding charm, and the photographer will here find scenes to depict which could not be equaled in any other part.  The calm, placid water, with the trees on the banks perfectly mirrored, is a picture that lingers long in the memory of those who visit here.  The lagoons are full of fish, and crabs can easily being caught here, owing to the shallowness of the water.
The bird life on the island consists of several varieties of gulls, magpies, butcher birds, blue mountain and green parrots, wrens, difference species of pigeons, doves, brolgahs, leatherheads, black cockatoos, Australian black swans and ducks.  Emus are also found here, these birds having waded across from near Caloundra.  Kangaroos and wallabies have also found their way to the island in this manner and besides these, there are dingoes and several species of iguanas.
The surfing beach at Woorim is patrolled by the Bribie Surf Life Saving Club in a most efficient manner, and here they have a shelter-shed and reel.  Persons who intend camping or residing at Woorim should note that orders for all goods are taken at the kiosk, including meat and milk.
The charms of Bribie Island are inexhaustible.  The visitor fond of boating can hire a boat at all times, and I would certainly recommend a trip through the Pumice Stone Passage as far as Caloundra.  The journey through the passage thrills one with the beauty of the scenery, the narrow channel threading its tortuous course for miles and miles between Bribie Island and the mainland emptying itself into the sea, at Caloundra.  It is indeed a most pleasing trip, with its myriads of small islands and bays, and the majestic Glasshouse Mountains and Taylor Range, stand out as a fitting background.
The sunsets in this region are beyond description, and to see the glories of a dying day in this locality is ample recompense for the time spent in coming here.  As before mentioned, the Pumice Stone Passage is an angler's paradise, and for years has been known to the numerous habitués of the bay.
A holiday spent on Bribie Island, away from the turmoil and hustle of city life, is a holiday well spent, and the visitor can rest assured that no dull moment need be spent here, and that the scenic charm of the Island and Bay, together with the exhilarating surf, will fit him afresh for the battle of life."